Photo Credit: Susan Cox
Robin Billups (left) and Paul Francis were among those who attended the “Optimizing the Transportation Sector: Infrastructure and Electrification” event hosted by the Black Business Association of Los Angeles in Compton.

SCE and city agencies partner to outline air quality and clean energy goals at a community meeting in Compton.
By Susan Cox
Subscribe

Regional transportation as we know it today will be transformed over the next several years as California moves forward to meet its ambitious clean energy goals and improve air quality by 2030.

Thompson recently spoke at the “Optimizing the Transportation Sector: Infrastructure and Electrification” event hosted by the Black Business Association of Los Angeles at the Center for Sustainable Communities in Compton. The event was sponsored by SCE and the California Department of Transportation. 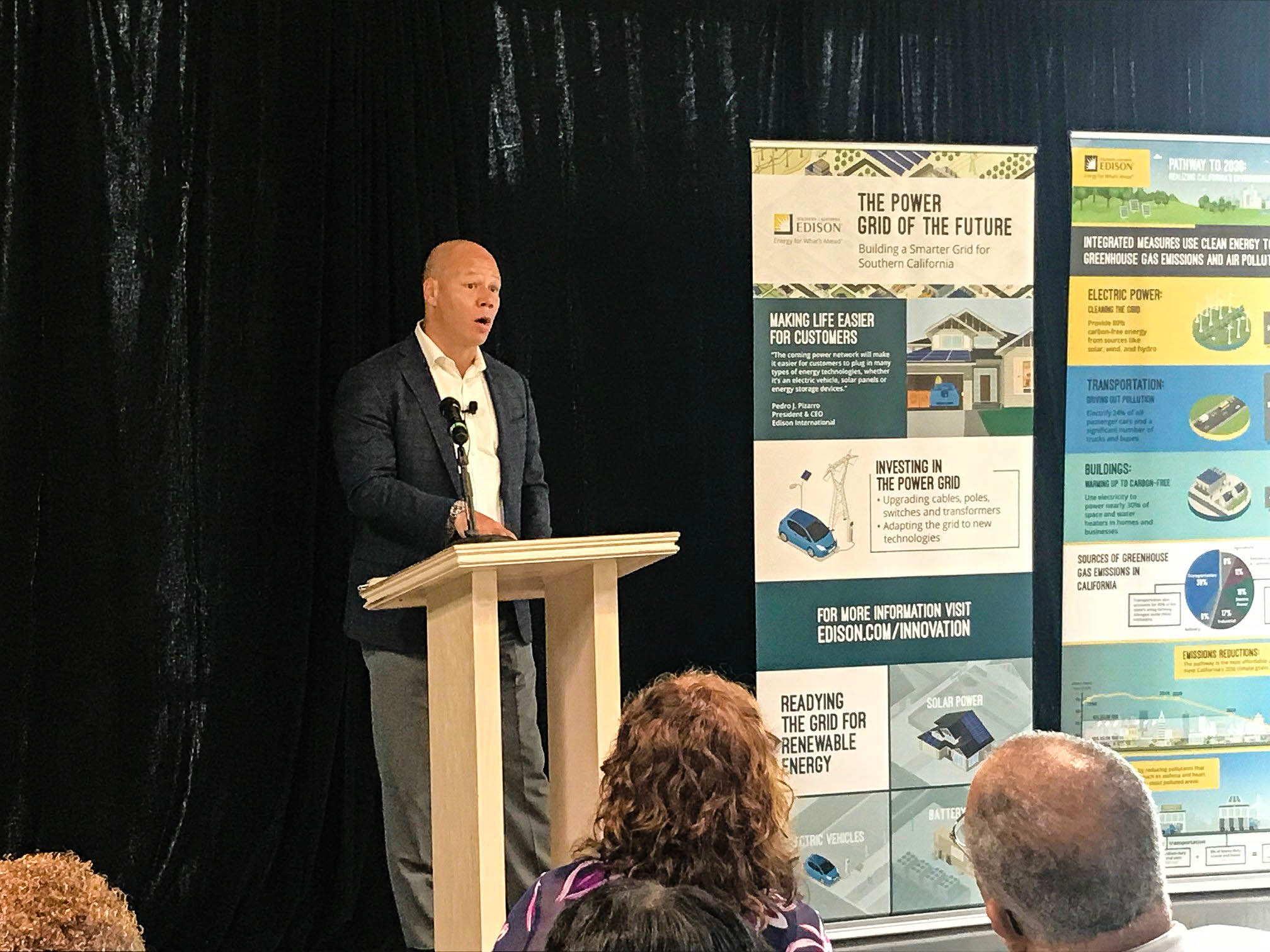 Thompson shared SCE’s blueprint for California to reduce greenhouse gas emissions and air pollution by 2030. The Clean Power and Electrification Pathway includes a three-part, integrated solution to tackle some of the largest emissions sources that contribute to poor air quality.

Not lost in the discussion were environmental benefits detailed by state Sen. Steven Bradford, whose 35th District includes the city of Compton. He said the Road Repair and Accountability Act of 2017, also known as SB 1, is funding $54 billion in transportation maintenance and improvements across the state over the next 10 years.

“This is a critical piece of legislation,” he said.

The audience of local businesses and community leaders was particularly interested to hear about robust jobs and procurement opportunities for women, minority, disabled veteran-owned and LGBT businesses interested in bidding on projects that support the state’s environmental goals.

Currently, more than 6,500 transportation and infrastructure improvement projects are underway in California. Over 700 projects totaling $4.4 billion are earmarked for Los Angeles County over the next 10 years. By 2020, the California Department of Transportation plans to increase the dollar value of contracts awarded to small, disadvantaged and disabled businesses by up to 100 percent.

“It’s a game changer,” said Shirley Choate, interim director, District 7 for the California Department of Transportation, of SB 1. “We’re looking for a lot more businesses to do state work.”

Support for transportation electrification continues to grow across the region as more transit agencies commit to going all electric, including LA Metro, Los Angeles Department of Transportation, Foothill Transit and Antelope Valley Transit. LA Metro has committed to replacing its entire fleet with electric vehicles by 2030.

Still, residents in underrepresented communities aren’t so quick to embrace transportation electrification. Many see electric vehicles as too pricey and charging stations not convenient or readily accessible in their neighborhoods.

“How do we get there in a way that’s affordable, sustainable, good for the economy and good for you and me?” asked Thompson. “The best solution is to embrace, rather than resist, the transformative changes taking place across multiple sectors of our economy.”

“Making these electric vehicles affordable is just as important as having the infrastructure in place,” said Bradford.