Two power poles with crossarms and wires were installed in Rancho Cucamonga to give fire trainees a more real-world experience working safely around electricity.
Skip to content
Stories : Safety
Download Photos Download All 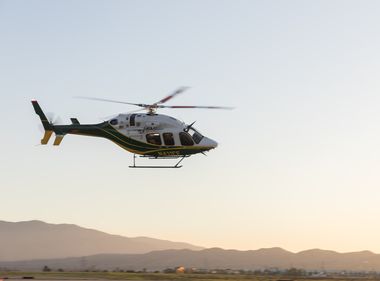 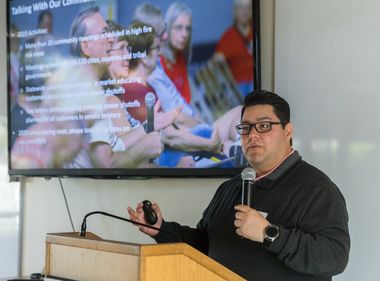 Two power poles with crossarms and wires were installed in Rancho Cucamonga to give fire trainees a more real-world experience working safely around electricity.

The Rancho Cucamonga Fire District’s All Risk Training Center had nearly everything firefighters and other first responders could need to simulate real-world training including structures replicating a four-story apartment building, a six-story building, a house and a commercial space for offices and a warehouse.

But in a recent visit to the center, Scott Brown, one of Southern California Edison’s Fire Management officers, noticed one important thing that was missing — a realistic setup of power poles and electrical equipment that firefighters routinely confront during emergency responses.

This month, the fire district’s new academy class of 14 started getting that real-world experience after Brown arranged to rework the two power poles and crossarms already at the training center and donate additional electrical equipment.

SCE linemen Larry Blair, Jeremy Kolbach and Richard Rocha installed the equipment including non-energized wires, an insulator, a fuse and a dropline to a building like those firefighters would see in the field.

"Firefighters are our partners and we want them to be safe,” said Brown, who knows, as a former firefighter and later an SCE lineman, the risks first responders face around electrical equipment, often in the dark and under difficult conditions.

SCE linemen routinely roll out on calls from emergency agencies to help secure electrical equipment at a scene.

Brown, who also teaches classes on electrical safety to fire departments throughout SCE’s service area, said the more first responders can learn about electrical equipment and the potential hazards it may pose, the safer they will be.

It’s not just a downed electrical line that can be a hazard, but anything it may touch, like a chain-link fence or metal siding on a house or even wet grass. People are often unaware that when power lines are damaged or down, they may still be energized when sparks can’t be seen or heard.

“We are dealing with power lines every day,” he said. “It’s all about personal ground safety and situational awareness about what’s in front of us and being mindful about what’s above us.”

The Rancho Cucamonga Fire Training Center project is just one in an ongoing partnership SCE has with firefighters and other first responders throughout its service area. An SCE crew also installed a power pole setup like Rancho Cucamonga’s for Chino Valley firefighter training.

As part of its wildfire mitigation efforts, SCE is also supporting other fire training. Last year, the utility gave a $500,000 grant to the California Conservation Corps for wildfire mitigation including a female firefighter training program. SCE also provided $4 million to the Orange County Fire Authority last year to help pay for a supersized-hover-filling helicopter demonstration project.