SCE Employees Celebrate the Holidays by Giving Back 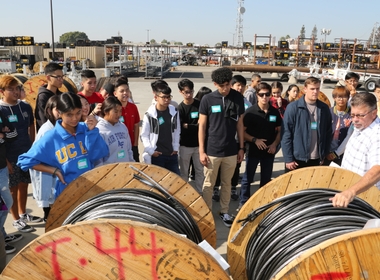 What do engineers do?“Every day is different,” said Danielle Chanes, a Southern California Edison distribution field engineer. “There are all sorts of engineers — mechanical, ...
View Story 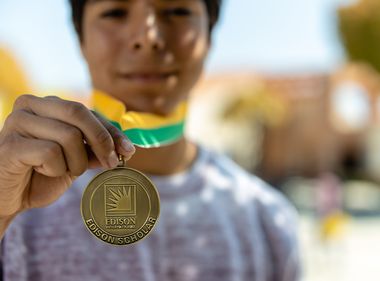 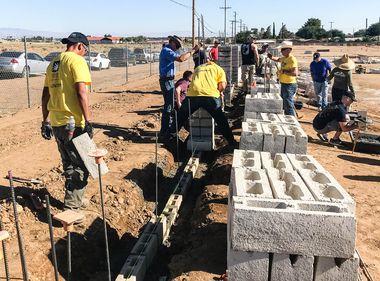 What do engineers do?“Every day is different,” said Danielle Chanes, a Southern California Edison distribution field engineer. “There are all sorts of engineers — mechanical, ...
View Story

SCE Employees Celebrate the Holidays by Giving Back

GARDEN GROVE, Calif.  — The 5-year-old girl in the knee-length yellow Southern California Edison volunteer T-shirt didn’t skip a beat when asked to spell her name. “C-I-E-N-N-A,” she said. But when it came to her last name, she thought a moment, then shrugged, “I forgot.”

Cienna was part of the six-strong Valenzuela clan, organized by Roxanne Valenzuela, an SCE program analyst in Compton, to participate in the company’s recent National Family Volunteer Day event at the Orange County Food Bank in Garden Grove.

While Cienna was a little uncertain about her last name, she was laser focused on her job that day — moving empty boxes to an assembly line for volunteers to fill with non-perishable food.

“We want to start them young, so they know what giving is all about,” said Cienna’s aunt, Nicole, who was helping nearby.

Many of the more than 200 Edison International volunteers and their families and friends said they were participating because it was a family event and they wanted to show their children they could give by doing.

“This is part of who we are as Edison and part of how we support the community by helping families,” said Kevin Payne, SCE’s president and CEO, who worked alongside the other volunteers, shuttling boxes packed with cereal to be completed on one of the four assembly lines.

Warren Jackson expressed similar sentiments as he and his 15-year-old son, Bryce, prepared flats of cardboard to be assembled into boxes.

“I really like doing it,” said Jackson, an SCE business systems analyst. “It reminds me of my days in the Marine Corps when I spent 10 years in logistics.”

Other volunteers packed the boxes with a variety of food including the cereal, vegetable soup, tuna, applesauce, boxes of milk, peanut butter and rice — enough food to supplement a needy senior’s meals for a month.

Besides the volunteer labor, Edison International, SCE’s parent company, also donated $5,000 to the food bank, part of the $23 million the company will give to organizations throughout its service area this year.

When the day was done, Edison volunteers had packed 4,944 boxes of food, part of the 29,971 the 14 corporate and community teams that participated assembled that day.

“I like to tell people, this is not about boxes or cartons or bags, it’s about people,” said Mark Lowry, food bank director. “We were able to help 29,991 people today.”

Kimbrew, who was once a homeless veteran with PTSD and ADHD but turned his life around after culinary training at Le Cordon Bleu, now devotes his time to helping others in need. Two years ago, he cooked meals for Hurricane Harvey flood victims in Houston. He has been cooking for Trona residents since the twin earthquakes caused major damage this summer.

The electric cooktops were new to the chef who has only cooked with gas. But he said he wanted to give them a try for cooking the sweet potatoes. The equipment worked beyond Kimbrew’s expectations and provided needed equipment for preparing the big meal.

“I want to give a big thank you to Edison for allowing us to be part of this dream of helping feed people in need,” he said.