On a recent Sunday morning, music filled Hope in Christ Community Church in Compton, where Pastor Ed Robinson led the congregation in song, prayer and praise.

On Monday morning, Robinson was back at his office at Southern California Edison’s Rosemead headquarters, where he is a principal manager of strategic engagement in the Local Public Affairs department

His recent sermon focused on serving others, sometimes in unconventional ways. Robinson sees parallels in his roles as pastor and utility manager.

“It’s not as daunting as it sounds. I look at what I do at Edison as a ministry,” he said. “We’re serving the community, trying to reach the hard to reach customers, trying to mitigate hardships so folks don’t have their lights turned off. I‘m serving people here at SCE, the community, and as a pastor, I’m doing the same thing.”

After the Sunday service, Robinson warmly greeted parishioners, hugging and shaking hands. Minutes later, the 55-year-old pulled off his jacket, loosened his tie and headed for the parking lot where he practiced shooting hoops with 13-year-old Mary Moore.

“He teaches me the right things,” said Moore, who is a fan of Robinson’s.

In addition to working with nonprofits to educate them about the company’s programs and services, Robinson and his SCE team coordinate the company’s speakers’ bureau. They also participate in an internship program for the boys who attend Verbum Dei High School in Watts.

He can relate to the students because he has been there. Robinson was born and raised in Watts before his family moved to Compton. A father of four adult children, he regards himself as the students’ unofficial sponsor and they often seek his guidance.

Robinson’s 32-year career at SCE began after a friend encouraged him to apply. It took some coaxing at first, but he eventually applied and was offered a customer service position 15 minutes into the interview. Since then, Robinson has held numerous positions in the company, including customer service trainer, energy auditor and credit supervisor. He has also served roles in local government affairs and corporate communications.

But the position he regards as the underpinning of his career was at the customer call center, where he served as conflict manager, adviser and psychologist. Most importantly, he was a good listener.

“I grew up poor. I was a welfare child,” said Robinson, one of nine children. Their single mother juggled many jobs to provide for the family. “We didn’t have a whole lot and I remember my mother calling companies and asking for extensions [to pay bills]. My attitude when I got to Edison was everybody was my mama.”

On April 29, 1992, Robinson remembers driving home after work and seeing his beloved city of Compton and surrounding areas in flames. He had not heard about the Rodney King verdict that sparked days of rioting and protests. Edison was one of the corporate partners supporting the Rebuild LA effort following the uprising. Robinson was tapped to convert an old SCE service center in Compton into a regional job training center.

Tammy Tumbling, SCE’s director of Philanthropy and Community Investment, was once Robinson’s intern. She continues to view him as a mentor.

“He lives the company values,” she said. “Ed is strategic and deliberate in forming and maintaining lasting relationships inside and outside the company.”

Robinson’s passion for his faith and good works is evident to Reggie McNulty, who has been attending Hope In Christ Community Church for three years.

For 19 years, Robinson hosted a weekly, one-hour cable television show, “Compton From the Inside Out.” He interviewed community members, politicians and often had Edison representatives discussing programs and services. Last year, he was also named an Edison Chairman’s Award winner.

“He balances well and doesn’t get overwhelmed,” said Yvonne Robinson, his wife of 32 years. “He’s got an even keel.”

Robinson’s faith infuses his life and he rarely experiences conflict between professional commitments and his higher calling. He admits once in a while that a “can I get an amen” may slip out during a meeting, but it’s usually met with smiles and agreement.

“I’m fortunate and blessed at church and at Edison,” he said. “I have a great team and I’m surrounded by some of the smartest people at work. And then the people on my church team, my volunteers dream with me the larger vision to impact the city of Compton.” 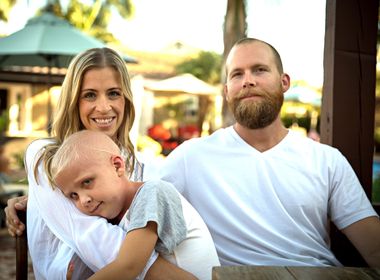