OC Habitat Family Gets SCE Home of the Future

SCE teams with Habitat for Humanity to give a veteran a green home, which features the latest in all-electric, energy-efficiency technology.
By Mary Ann Milbourn
Subscribe

As you drive south on Flower Street in Santa Ana, the sage green Craftsman-style house with the white trim only stands out because it’s newer than the 1940s- and 1950s-era homes in the neighborhood.

But behind the unremarkable exterior of the three-bedroom, two-bath home is the house of the future.

The home, a joint project between Southern California Edison and Green Home Builder magazine, features the latest in all-electric energy-efficient technology from its solar roof to the special foam insulation used during construction that is now hidden behind the walls and ceiling.

And soon it will belong to a veteran and his family as an SCE donation to Habitat for Humanity of Orange County.

“This home provides the latest in energy-efficient construction while giving a veteran and his family a house with a quieter interior, increased comfort, better air quality and a lower electricity bill,” said Marc Ulrich, SCE vice president of Customer Programs and Services. “Working with Habitat for Humanity on this project has allowed us to give back to the community and demonstrate SCE’s commitment to helping the state meet its clean-energy goals.” 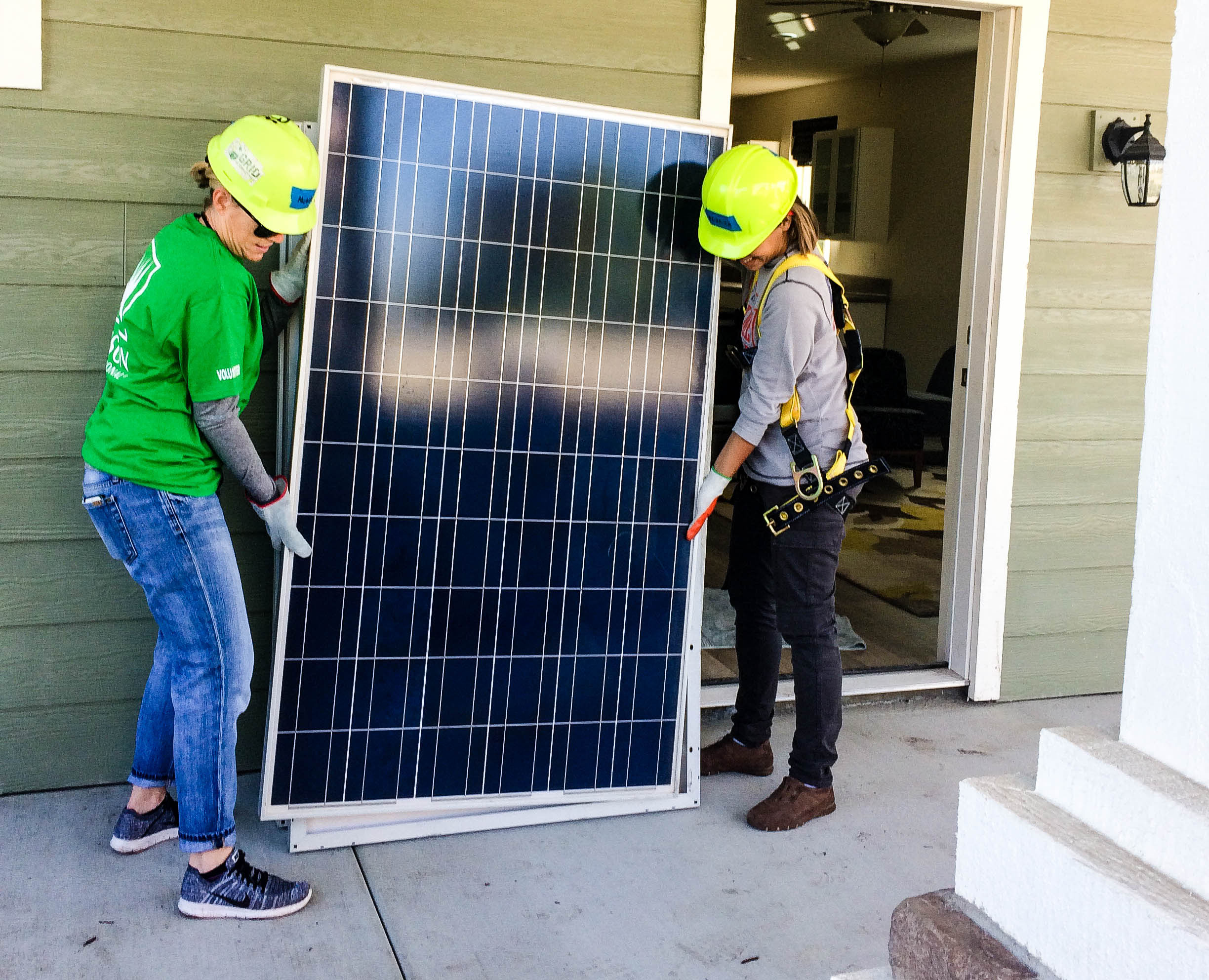 Two SCE volunteers help move some solar panels before installing them on the ABC Green Home in Santa Ana.

This is actually the second life for this house. It began in 2012 as the ABC Green Home at the Orange County Great Park, an SCE demonstration project to show it is possible to design an affordable, buildable and certifiable (ABC) energy-efficient house. Over the last year, it was rebuilt in Santa Ana on a lot provided by Habitat for Humanity.

What makes it unique is it is a zero net energy home whose rooftop solar will offset the electricity used inside. That translates into a significantly lower electric bill for the family while limiting the impact of the new construction on SCE’s power grid.

As such, the house provides a preview of California homes to come. Beginning in 2020, all new homes built in the state will have to be zero net energy. The new building standard is part of the statewide effort to reduce energy use and greenhouse gases.

The house has numerous features that maximize its energy efficiency, including:

Overall, the all-electric house’s energy efficiency exceeds state standards by more than 25 percent while avoiding the use of toxic materials.

Under the agreement with Habitat, SCE will monitor electricity usage in the house over the next two years using remote energy monitoring technology. The lessons learned will be shared with builders and developers making their transition to zero net energy construction.

In addition to the lot, Habitat provided off-site and on-site preparations, landscaping and a special zero interest mortgage with monthly payments no more than 30 percent of the homeowner’s income.

The family getting the home also contributed 500 hours of “sweat equity” helping build and finish the house in addition to the work done by Habitat volunteers. Edison employees also participated as volunteers to help install the solar system on the house.

Sharon Ellis, chief executive of Habitat OC, called the house a great partnership with SCE that will help a family own a home in an area where, for many, it’s only a financial dream.

“And now, because of this project, they have a home they can afford that will be safe and healthy and energy-efficient for years to come,” she said.