Amid record outages, the popular gifts should always be tied down and never released to avoid power disruptions and explosive situations.
By Paul Netter
Subscribe

As bad as this metallic-balloon-caused explosion looks …

… it could have been much worse.

People and workers could have been too close and seriously injured. In fact, a utility crew had been working on the power pole where these balloons eventually exploded last July in Long Beach before an astute foreman ordered them to stop work and, along with the ground crew, move a safe distance away.

Fortunately, that helped prevent any injuries, but it could not prevent the prolonged power outage that left 3,056 homes and businesses without electricity at 10:40 that Tuesday morning. Extensive repair work restored all power at 8:52 that night.

It is a situation that plays out hundreds of times a year because of adrift metallic balloons, and February typically marks the onset of a dramatic increase in outages caused by them that peaks in June.

That, however, is easier said than done since Southern California Edison experienced for the third straight year a record number of metallic-balloon-caused power outages with 1,094 last year.

“Metallic balloons look harmless, but this incident proves again how dangerous they are when released outdoors,” said Andrew S. Martinez, vice president of Safety, Security and Business Resiliency at SCE. “People should always keep them tied to a weight, as state law requires, keep them indoors and never, ever release them outdoors — individually or in a bunch — to ensure safety and eliminate possible power outages.”

A new bill has been introduced in the California Assembly to combat the problem.

Two metallic balloons were to blame in Long Beach, where lineman James Yolla and apprentice Brandon Copp from Hampton Tedder Electric, an SCE contractor, were doing repairs on a pole when crew foreman, John Harley Saiz, noticed an unusual sound. Seeking out its source, Saiz walked a short distance and saw the balloons tangled in power lines — about 50 feet from the on-the-pole linemen. 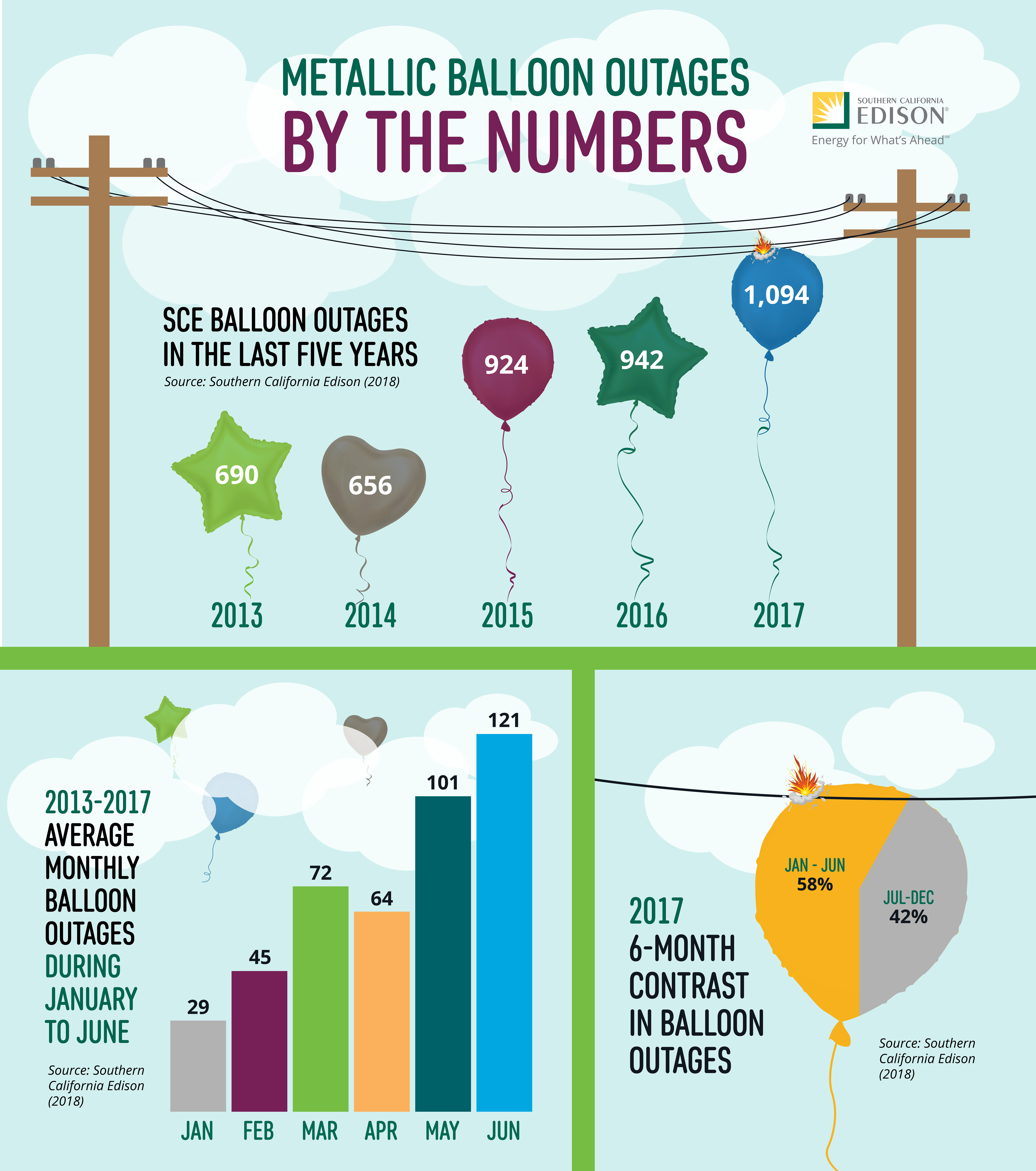 “The wind was kind of banging them together where I heard a thumping noise,” said Saiz. “They were halfway between where we were working and the next pole. In fact, one of the customers said she saw them go right past her window.”

Thinking safety first, Saiz had Yolla and Copp immediately climb down, made sure his workers and any other people were not in danger and called for an SCE troubleman to de-energize the lines to safely remove the balloons.

But, the balloons didn’t cooperate.

“Shortly after, maybe 10 to 15 minutes, [the balloons] worked their way to the pole we were working on and then the explosion occurred,” said Saiz, calling it the worst balloon incident he has experienced in his 20 years on electrical crews.

The blast engulfed the top 10 feet of the pole — including where the linemen had been working — and resulted in two downed power lines.

“After seeing it, the crew was in awe over how loud and how big the explosion actually was,” said Saiz. “My thoughts were that I’m really glad we took precautions to get the guys off the pole.”

A pole that Saiz’s crew, with the help of another Hampton Tedder crew, ended up replacing as part of the overall repair work in restoring power that went into the night.

Saiz now says the incident has had a lasting effect on his crew, adding, “It’s funny like every time we pull up to a job now, the crew notices [the balloons] right away hanging on the lines, whether they’ve been burned, melted or whatever. The crew notices them a lot more now than previously.”

Which only reinforces Saiz’s long-held thoughts on their release.

“I definitely don’t think any should ever be released,” he said. “Sooner or later, those balloons will find their way to the ground, and who knows whether or not they’re going to end up in a power line.”