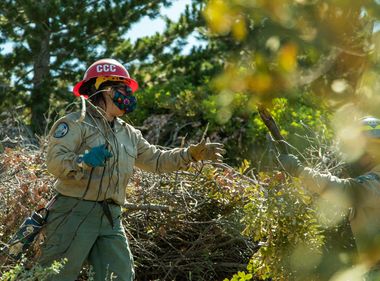 Along state Route 330 past Running Springs is the Keller Peak Fire Lookout near Big Bear. For the past few months, Julian Marenco, 26, a Crewleader with the California Conservation Corps, and his fellow Corpsmembers have worked to clear hazardous brush and trees in the area. ...
View Story

Along state Route 330 past Running Springs is the Keller Peak Fire Lookout near Big Bear. For the past few months, Julian Marenco, 26, a Crewleader with the California Conservation Corps, and his fellow Corpsmembers have worked to clear hazardous brush and trees in the area. ...
View Story

Nami Elliott’s home sits above the western side of the valley floor in Inyo County’s Old Wilkerson. When the Taboose Fire burned close to her home about a year ago, she still remembers the “horrific winds” and the sky that had turned pink and red. ...
View Story
View Comments
Leave a Comment
Comments
Stories : Safety
Download Photos Download Video Download All

SCE Air Ops helicopter pilots partner with linemen from Transmission and the HALO team to increase efficiency of inspections for wildfire mitigation.

Sean Menasco’s day job includes being safely hoisted up and carried by a helicopter to the top of a transmission tower 300 feet high in remote desert and mountainous areas. He is supporting the new HALO (Helicopter Assisted Line Organization) team at Southern California Edison that uses the HEC (human external cargo) work method.

On this day, journeyman lineman Menasco is in the Angeles National Forest near Palmdale with fellow crew members to help inspect nine transmission towers for any needed repairs, work that is part of the utility’s wildfire mitigation efforts.

“It’s a very easy way to get to the tower and it makes our jobs a lot easier,” he said. “When you are up in the air, you can see a lot more. It speeds up on the time and it’s easier on the body too.

“Flying is a lot of fun. It’s almost like sticking your head out of a window doing about 90 mph. It’s fun, it’s thrilling, it’s exhilarating.”

After an early morning team meeting and thorough safety check, the two-man crews are hoisted up by SCE Air Ops pilots and flown to the transmission towers. After steadily dropping the linemen onto the towers, they hook themselves to the infrastructure and then unhook themselves from the helicopter.

The lineman then spend about 15 minutes moving around on each tower to look for any abnormalities before they become problems. If they find something, they input the information into iPads and also take photos. The information is then sent to the aerial inspections team for further analysis. If repairs are needed, the HALO team, with Transmission grid support, will be called out again to do the repairs.

Once the team inspects one tower, the helicopter pilot then picks them up and brings them to the next transmission tower to inspect.

“This method is how we are able to get to these remote structures,” said Marc Ferguson, who leads SCE’s HALO team. “By using helicopters, we are able to fly in a straight line, avoiding obstructions on the ground. He also noted that “it is also way less fatiguing for our linemen,” who don’t have to hike to and climb the structures.

In addition to transmission work, Ferguson hopes to expand the Transmission HALO team’s work into distribution, hydro and environmental groups, along with any other departments that may need the service.

SCE’s service area covers 50,000 square miles, much of it in difficult-to-reach desert and mountainous areas. Many roads in these areas are difficult to access or have environmental regulations in place to protect the area. This is where the HALO team offers its most value.

Using the helicopters, the HALO team can do inspections three to four times faster than ground inspections by truck and foot. A 30-40 minute drive to a transmission tower can be reached in seconds with a helicopter.

“This method shows efficiency, we fly them in and out,” said Torbjorn “TC” Corell, SCE chief pilot. There is lots of “training of the pilots and linemen. We work with these guys and we get to know them, and we build up the trust factor. That’s very important for HEC work.”

“It’s an awesome way to get work done and it’s a much smaller environmental footprint. It’s another tool in the toolbox,” said Mark Joslen, SCE senior patrolman.

To support the HALO team’s work, the company recently purchased two Bell 429 helicopters with a hoist that will be used to safely lower a lineman to lines and equipment in hard-to-access areas much like the Coast Guard uses. Ferguson hopes to start using this new method early next year, which will help to only increase his team’s efficiency.

“It’s a different feeling then almost anything, being pulled by a helicopter up into the air. It’s a rush,” said Ferguson, who performed human external cargo work for six years before managing the HALO team. “It’s an easier transition for linemen since they are used to the heights. It takes a different kind of attitude. You are putting your life in the hands of the helicopter pilot. It takes trust and we are a family.”