Nami Elliott’s home sits above the western side of the valley floor in Inyo County’s Old Wilkerson. When the Taboose Fire burned close to her home about a year ago, she still remembers the “horrific winds” and the sky that had turned pink and red. ...
View Story

In the southern Sierra Nevada, the Pacific fisher – a carnivore in the weasel family that eats birds and even porcupines – is now on the endangered species list for these mountains partly due to the loss of their habitat from wildfires. ...
View Story 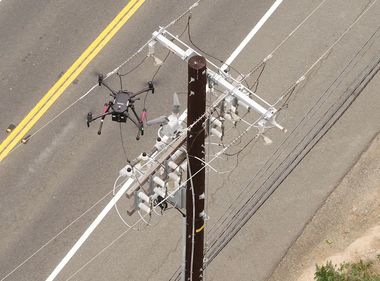 Nami Elliott’s home sits above the western side of the valley floor in Inyo County’s Old Wilkerson. When the Taboose Fire burned close to her home about a year ago, she still remembers the “horrific winds” and the sky that had turned pink and red. ...
View Story

In the southern Sierra Nevada, the Pacific fisher – a carnivore in the weasel family that eats birds and even porcupines – is now on the endangered species list for these mountains partly due to the loss of their habitat from wildfires. ...
View Story

Alyssa Grigoryan has been studying to get her Remote Pilot Certificate from the FAA so she can become a certified drone pilot. She hopes to get her license in the next few months, a process that was put on hold during the coronavirus pandemic. ...
View Story
View Comments
Leave a Comment
Stories : Safety
Download Photos Download All

Along state Route 330 past Running Springs is the Keller Peak Fire Lookout near Big Bear. For the past few months, Julian Marenco, 26, a Crewleader with the California Conservation Corps, and his fellow Corpsmembers have worked to clear hazardous brush and trees in the area.

Working with chainsaws and hand tools, the Corpsmembers brave the hot summer temperatures in masks while social distancing to perform ongoing wildfire mitigation as more than a dozen wildfires burn across the state.

“It’s definitely challenging work, but the problems are very real, and we see the results of our wildfire mitigation work,” said Marenco, a University of California, Berkeley graduate. We hope our work “can lessen the number and severity of wildfires that happen and allow the firefighters a chance to establish a good start to fighting the fires.”

As the country’s oldest and largest conservation corps, with about 3,000 enrollees each year, its Forestry Corps program is working year-round to remove dry brush and trees that can fuel wildfires. The CCC Forestry Corps partners with CAL FIRE, the U.S. Forest Service, county agencies and fire safe councils.

On this day, the CCC has Corpsmembers activated at 30 different fires, mostly in Northern California. In addition to 12 Type 1 firefighting crews that provide support during the initial attack of a fire, the CCC has another 80 crews available to provide fire camp support.

“We are prepared for wildfire season and we are still doing the important work of fire mitigation,” said Bruce Saito, CCC director. “Under incredible stress and physical demands, this important work needs to get done.”

Isela Garcia, 26, from Colton, has been enrolled in the CCC for about eight months. After graduating from California State University, Fullerton with a degree in photography, she worked at a pizza shop before learning online about the Corps.

After enrolling, she first worked on Caltrans projects before joining the CCC Forestry Corps.

“It gives me a chance to support my community, first responders and see how the IMT (Incident Management Team) works,” said Garcia. “It feels good to support them in both minor and major roles. This type of work is so fulfilling.”

With a degree in history and theater from UC Berkeley, Marenco, from San Bernardino, worked in the university’s library for about a year, but quickly realized he wanted to work outdoors. That’s when he discovered the CCC.

In September, it will be a year since he joined and appreciates the hands-on learning he has received from CAL FIRE firefighters and the U.S. Forest Service. In the future, he hopes to work full time at CAL FIRE.

“I want to help the community and by doing fuel reduction, I can continue efforts to mitigate fire hazards,” he said.

As California’s wildfires burn amid the COVID-19 pandemic, the CCC Forestry Crops has had to adjust its safety protocols. In addition to masks and social distancing, all vehicles are sanitized before they leave and when they return. Buildings are also being thoroughly sanitized.

Corpsmembers are also busier than last year with an increase in the number of fires they have been called out to.

“We, like everyone, have made a number of adjustments. We are busier, but we are doing the same important work of wildfire mitigation,” said Saito.