After a 20-plus year career as IBEW Local 47 business manager, Pat Lavin steps down. SCE notes the important partnership over the past two decades.
Skip to content
Stories : People
Download Photos Download All 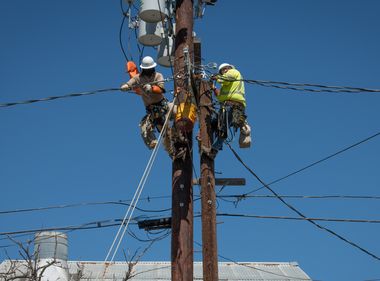 There are almost 75,000 electrical lineworkers in the United States. And they help power homes and businesses across the United States, essential work that continues during the coronavirus pandemic. ...
View Story

There are almost 75,000 electrical lineworkers in the United States. And they help power homes and businesses across the United States, essential work that continues during the coronavirus pandemic. ...
View Story

After a 20-plus year career as IBEW Local 47 business manager, Pat Lavin steps down. SCE notes the important partnership over the past two decades.

In 1966, Pat Lavin first became a member of IBEW Local 9 in Chicago working during the summer for a signatory contractor. When he joined the U.S. Marines in 1969, his grandmother continued to pay his union dues during his three years of service.

On March 12, Lavin officially announced his retirement from IBEW Local 47. His last day with the International IBEW will be March 31.

“Any good manager or leader of an organization knows when it’s his or her time to depart. I am handing things over to the next generation,” he said. “I just figured, I am 71 years old and in relatively good health, so I said ‘OK, I am done.’”

Lavin held the position of IBEW Local 47 business manager/financial secretary for 22 years. One of his proudest accomplishments is helping to grow the membership from 4,500 when he took over in 1999 to nearly 14,000 members today.

“It is now three times the size it was in 1999,” he said. “We had a vision for where we wanted the organization to go and with the help of the good people of our staff and our members, that’s how we got there.”

He added: “Financially, the local is in good stead with enough resources to accomplish what we need to do.”

Lavin has seen many changes in the electrical industry during his time in the IBEW, including recessions and periods of anti-union rhetoric, and he has weathered it all.

“The need for our services has grown immensely over the past 20 years and we have grown. I am very happy about that,” he said.

Over his lengthy career, Lavin was a lineman for four different utilities. He worked for Southern California Edison as a lineman, a service crew foreman and a heavy crew foreman, in Redondo Beach, Huntington Beach and Santa Ana. He retired from SCE when he was 59 years old.

“Pat has been a good partner to SCE and its employees represented by Local 47,” said Kevin Payne, SCE president and CEO. “As the company and industry adapted to transformational changes, Pat was there to support our efforts to become an industry-leading energy company.

“His backing of the company’s wildfire risk mitigation efforts and safety culture evolution has helped protect the safety of our communities and workers. We look forward to the continued partnership with IBEW Local 47 members on our mission to safely provide clean, reliable and affordable energy to our customers,” he added.

“I have truly enjoyed working with Pat over the years. His dedication to the success of IBEW Local 47 team members is admirable,” said Pedro J. Pizarro, president and CEO of Edison International. “Congratulations to Pat on his well-deserved retirement and I look forward to continuing the partnership between SCE and IBEW Local 47.”

Lavin was a journeyman lineman for 45 years.

“As a groundman, an apprentice and a lineman, I have helped keep the lights on since 1969,” he said. “If you do your job the right way and do it safely, things will turn out the right way.”

He jokes that he used some of his SCE retirement money to build his backyard swimming pool (but it’s true).

“I get to see my SCE retirement money every day,” he chuckled.

Lavin was remarried just a little over a month ago and he is looking forward to traveling with his wife, Dianne, especially since both recently got their COVID-19 vaccinations. They are thinking a trip to New York or maybe Europe might be in their near future. In his retirement, he will also be able to spend more time with his 11 grandchildren.

As Lavin steps down from his roles in IBEW, his son, Colin, will now take on the position of business manager/financial secretary for IBEW Local 47.

“If they stick together, they can do anything,” he said of the current IBEW staff.

“It has been an honor to be an IBEW member,” said Lavin. “I am humbled by what we have done, what we have accomplished. To have left it a better place for IBEW members.”