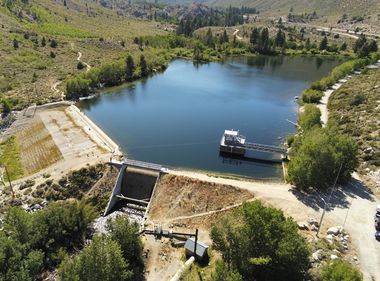 The utility is at the forefront of combining aerial vehicles, artificial intelligence and machine learning to eliminate and lower wildfire risks.

Drones are rapidly transforming industries like package delivery, agriculture and even real estate.

Electric utilities are no exception, and Southern California Edison is setting the pace among California’s utilities. Its drone program is maximizing the technology with its more than 200,000 annual inspections of electrical infrastructure in high fire risk areas as part of its Wildfire Mitigation Plan.

Unmanned aerial vehicles, better known as drones, have become irreplaceable in performing inspections of the more than 400,000 poles, transformers and lines in SCE’s high fire risk areas, or about 27% of its 50,000-square-mile service area. Aerial inspections in these areas are now done 75% by drones and 25% by helicopters when just a year ago it was the exact opposite. Drones are also being deployed outside high fire risk areas for dam inspections, with pilots planned for other SCE facilities.

“Drones and helicopters allow us to see our structures from a perspective that the ground inspectors cannot,” said Alyssa Grigoryan, SCE principal manager of Aerial Inspections. “Looking at a structure from top down gives us visibility to issues and possible ignition risks that we may not see from the ground. Not doing aerial inspections is just not an option for us anymore.”

A “next-level” new option for the bourgeoning program is the introduction this year of artificial intelligence (AI) and machine learning (MI). Grigoryan’s team is deploying the technology as an additional tool to help identify deterioration, often hard to see from the ground, on cross-arms and developing additional models for poles, transformers and other equipment.

With AI and MI, SCE drones’ high-resolution photos of distribution and transmission infrastructure, attached equipment and their surrounding areas can be analyzed in a more efficient way. It all begins with computer models being trained to identify equipment requiring maintenance.

The technology eliminates some time-consuming routine tasks for SCE’s inspectors — many of whom are former linemen and troublemen — allowing them to focus largely on ignition risks while also reducing inspection times.

"It increases efficiency, productivity and it increases our ability to identify issues in a much faster way, so it’s very exciting,” said Grigoryan. “This doesn’t mean we’re not going to need inspectors, it just means that the AI and MI models identify structures with deterioration right away so they can be inspected first.”

Poloi Lin, a senior advisor on Grigoryan’s team, said those structures requiring maintenance — numbering about 800 last year and nearly 500 so far this year and escalated as Priority 1 repairs — are fixed within 24 hours because of their potential fire risk.

Noting that at its peak, SCE’s drone inspections are conducted by more than 100 two-person teams, Lin added that AI and MI helps immensely in the constant cycle of structure inspections that can exceed 10,000 weekly ahead of high fire season.

“[AI and MI] help our customers in that problems are avoided sooner and faster to keep the community safe,” said Lin. “We can prevent outages and ignition risks and it is one additional tool that we can use to better maintain our system for our customers.”

And Grigoryan said it is only the beginning for the advanced technology.

While SCE is now mainly using AI and MI to pinpoint cross-arms requiring remediation, her team is partnering with other departments to build additional models for poles needing maintenance, faulty insulators and transformers while already piloting the immediate flagging of blurry photos for retaking and real-time streaming inspections.

“Basically, you’ll have a pilot in the field manning the drone while at the same time an inspector in the office or from home inspects a structure in real time,” said Grigoryan about streaming. “We can have the inspectors instruct the drone pilot to scoot over to the right, zoom in, scoot to the left and zoom out while performing an inspection in real time.”

She also said that streaming could possibly be used in pre- and post-Public Safety Power Shutoff (PSPS) power line inspections so power can be safely and quickly restored. Additionally, SCE is training its inspectors to eventually handle both ground and aerial inspections with a single visit, minimizing the inconvenience to customers of multiple visits and reducing program costs.

As for the drones, they are operated by FAA and SCE Air Operations-authorized pilots who follow SCE’s stringent cybersecurity and confidentiality policies while flying mainly in residential and densely populated areas. Helicopters often fly in largely rural areas.

In addition to being quieter, drones can zoom in and capture crucial angles and details of components that helicopters can’t, though helicopters can still capture their images faster.

It is technology that Grigoryan not only appreciates as a program lead but also as an SCE customer and resident of a high fire risk area herself, saying, “If Edison is in your neighborhood using drones and helicopters to do inspections, most likely that’s because you live in a high fire risk area and we want to make sure we inspect all of the SCE structures in the neighborhood for your safety and the safety of the community.”

To opt in for text/email notifications of drone/helicopter inspections, go to sce.com/outagealerts.

Customers receive at least a few days' or weeks’ notice, depending on the flight schedule.