Drones: A New Tool in the Kit 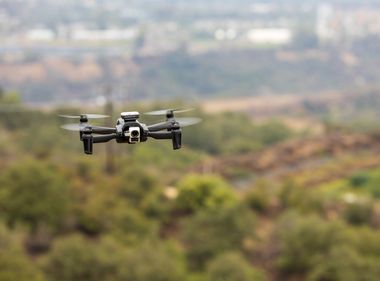 alifornia’s wildfire response efforts are about to get a huge boost with the addition of state-of-the-art firefighting equipment to help combat devastating wildfires throughout Southern California. ...
View Story
View Comments
Leave a Comment
Stories : The Grid
Download Photos Download Video Download All

Drones: A New Tool in the Kit

Troubleman Greg Davis is a 35-year veteran of Southern California Edison, doing a job that can involve long hikes over rough terrain to patrol power line circuits that may be at risk of sparking a catastrophic wildfire. He is among the first specially trained SCE troublemen equipped with drones to complete those patrols much faster and with less risk. Drone technology also benefits customers by helping to minimize the duration of Public Safety Power Shutoffs (PSPS).

“The biggest benefit is a time-saver. When we have circuits that are shut off and we have mountainous terrain and areas that are inaccessible, it might take us hours to go through. I can send a drone up and have it done in minutes,” Davis said. “That means we can get the power back on sooner.”

Troublemen look for tree branches or other obstructions that could contact electrical equipment during high winds.

“In the past, this may have required troublemen to climb several poles to determine where the problem really is. With a drone, they can move from pole to pole very quickly,” said Craig Stenberg, SCE program manager for Remote Sensing and Unmanned Aircraft.

“The safety side of that is over the period of their careers, climb after climb becomes very taxing physically, where with a drone, it prevents that from happening and it can potentially extend their careers.”

SCE’s Transmission & Distribution Transformation and Air Operations teams are testing drones to receive FAA approval for a wide range of applications, including flying over circuits that are beyond a troubleman’s line of sight and flying in more challenging weather conditions. Drones can be controlled manually, or programmed to fly a specific, predetermined route. They have multiple cameras and thermal imaging capabilities to help spot problems not visible to the naked eye.

“The implications there are making sure that we understand the conditions of the circuit before we actually experience an event. And then subsequent to the event, verify that the circuit is safe before we reenergize,” said Paul Grigaux, SCE vice president of Distribution. “We are now able to do that within a matter of minutes as opposed to hours.”

Davis describes himself as a “gadget guy” who has been flying drones as a hobby for several years. Now, he’s training other SCE troublemen who volunteer to become drone pilots. With these eyes in the sky as part of their tool kits, they are contributing to improved energy reliability for customers and safer working conditions and potentially longer careers for themselves.