Smoke billows from the front end of a crumpled white Chevy. The driver is slumped over, airbag deployed.

“Sir, can you hear me sir?” shouts the firefighter standing some distance away. The car hit a utility pole and live wires are dangling, making it too dangerous to approach. The growing smoke signals more imminent danger and little time to spare. “Sir, are you able to move?”

The man slowly rises from the steering wheel, and looks toward the firefighters. He is instructed to jump with both feet away from the car while avoiding contact with the car and the ground at the same time and to then shuffle his feet a safe distance away, keeping contact with the ground at all times. After much shuffling, he slumps safely into the firefighter’s arms.

Welcome to the filming of ‘Electrical Safety for First Responders,’ the sequel. It is a Hollywood maxim that sequels are never as good as the original. However, this one should prove the exception.

“For one, the production value is much better,” said Troy Whitman, fire management officer with Southern California Edison, who starred in the original and makes a cameo appearance in the sequel.

The utility is producing the video to increase awareness of electrical hazards faced by first responders. The first video was produced in 2004 and much has changed since then. The sequel covers old ground as well as new topics like solar panels and energy theft, substation fires and more.

“It tells a story,” Wright said. “It allows first responders to see an incident that they could come on the scene to.”

Electrical hazards are not something first responders encounter every day, but one mistake could prove catastrophic, Wright said. The video is a good reminder of the lurking dangers behind a structure fire or a car accident.

The video will be available to the 1,500 first responder agencies throughout SCE’s 50,000-square-mile service territory early next year, just in time for the El Nino rains and possibly more cars hitting power poles. The shuffling of the feet by the way prevents electricity from travelling through the body.

“First responders are the first ones on the scene,” said Whitman. “We want to make sure they go home safe to their families.” 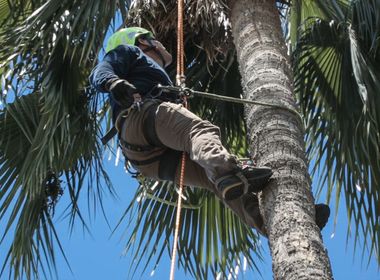 Added: September 04, 2015 | By Daniel Yi En Español Tree trimming can be a dangerous business. Falls are too common, and then there are beehives, snakes, overhead power lines and even deadly palm trees. Earlier this year, a tree trimmer got stuck...
View Story
View Comments
Leave a Comment