SCE recruiters are looking to fill about 120 summer internships, largely in the engineering fields.
By Mary Ann Milbourn
Subscribe

It was a warm spring day at California State University, Long Beach, but about 40 engineering students decided to forego the sunshine and their lunch hour for a windowless, brick-walled classroom. The reason? To hear about internships from recruiters at Southern California Edison.

SCE will be filling 120 internships this year, primarily for summer jobs. About two-thirds will require an engineering major. The meeting, hosted by the campus chapters of the Society of Women Engineers and the National Society of Black Engineers, gave the students the chance to ask questions about opportunities at SCE and get some resume tips.

Scarlett Carrillo, an SCE engineer, talked about her own career at the company, which started with a summer internship. She now uses her electrical engineering degree at a full-time job in Advanced Applications.

“I worked in Westminster at SCE’s Advanced Technology Group and learned about other parts of engineering like smart devices — smart roofs, smart thermostats, smart cars, smart houses” said Carrillo, an electrical engineer. “As an intern, I tested a lot of the devices other companies would send us.”

She encouraged the Long Beach students, many of whom were freshmen and sophomores, to get as many internships as possible while in college, both for the experience and the contacts.

“You can get jobs, but it is difficult,” said Carrillo. “It’s easier when you have a foot in the door.”

Gilbert Tse’s story was a little different from Carrillo’s. He earned his bachelor’s degree in bioscience but switched to electrical engineering for his graduate work at Cal State Long Beach.

While he studies at Long Beach, he is in a year-round internship at SCE working in network and telecommunications engineering. Tse said he has gained real-world experience.

“The SCE internship was an opportunity to learn things because I’d never been exposed to telecom,” he said.

One of the more interesting things Tse has done during his stint in telecom is work in fiber-optics associated with SCE’s military-grade cybersecurity system.

That got Tricia Echual’s interest. The sophomore computer science major said her goal is to work in cybersecurity, but she didn’t know SCE had those kinds of jobs.

“I learned SCE has four or five positions open in computer science,” she said. “I want to gain valuable experience in an area I’m interested in.”

Angela Delgado, manager of SCE’s college recruitment, said most of the company’s recent graduate hires come from the internship program.

SCE’s summer internships last 10-12 weeks. Some have the opportunity to transition as year-round interns. To be eligible for an internship, students must have at least a 3.0 cumulative GPA at an accredited university and be working toward an undergraduate or graduate degree.

For more information about careers at SCE and Edison International: edisonjobs.com or edisoncollegejobs.com 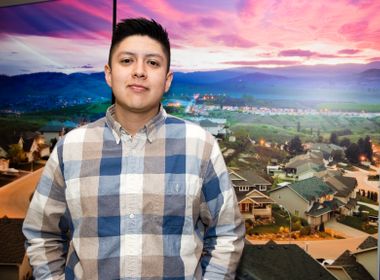 From Intern to Engineer, Helping to Build the Grid of the Future

Southern California Edison is celebrating Engineering Week, a nationwide event Feb. 21-27 highlighting how engineers are making a difference in today’s world and the need for more...
View Story

When Isai Rea’s friends ask him what he is doing at his summer job, the 18-year-old just shrugs and says, “I play with mice.” He says that’s easier than trying to explain his lab studies looking into whether the combination of nicotine and high-fat...
View Story
View Comments
Leave a Comment
Comments