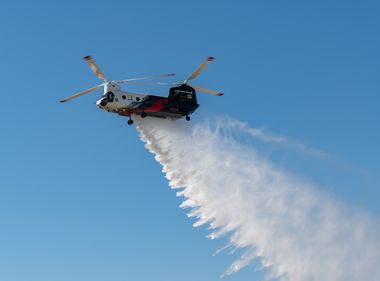 Capt. Greg Barta of the Orange County Fire Authority has been on the front lines of firefighting for 13 years. He has one word to describe the 2020 fire season to date: “Explosive.” ...
View Story

Capt. Greg Barta of the Orange County Fire Authority has been on the front lines of firefighting for 13 years. He has one word to describe the 2020 fire season to date: “Explosive.” ...
View Story

The small town of Shaver Lake in Fresno County has been spared from the devastating Creek Fire, the largest single fire in California history at more than 379,000 acres. ...
View Story
View Comments
Leave a Comment
Stories : Safety
Download Photos Download All

Residents in Southern California experienced several wildfires last year and some may have seen the large white, red and black helitanker flying overhead as it made its way to help put out a wildfire by dropping 3,000 gallons of water in a single pass.

In December alone, the aircraft saw 20 hours of flight time and 528 hours of standby time, making 101 water drops for a total of 223,438 gallons of water.

Based at the Joint Forces Training Base in Los Alamitos, the helitanker provided both day and nighttime fire suppression support in SCE’s 50,000-square-mile service area.

SCE President and CEO Kevin Payne said at a news conference last year: “The intensity of the 2020 wildfires so far, plus the impacts of the COVID-19 crisis, have put pressure on the state’s firefighting resources. With that in mind, it is a privilege for SCE to support the readiness of fire agencies such as the OCFA, which are on the front lines of protecting lives, property and critical infrastructure.”

“We appreciate the vision and generosity of SCE in making this very large helitanker available to help keep the communities we both serve safe,” said OCFA Fire Chief Brian Fennessy. “The helitanker is a force multiplier, especially during wind-driven wildfires with the ability to drop 3,000 gallons on a single pass, it made a significant difference in last year’s wildfires."