One evening in May 2009, strong winds known locally as Sundowners rushed down the Santa Ynez Mountains in Santa Barbara County, fanning flames that are believed to have been started earlier that afternoon by workers clearing brush.

Five years later, because of a groundbreaking partnership between Southern California Edison and the Santa Barbara County Fire Department, there is hope that new, cutting-edge fire detection equipment recently installed on the utility’s transmission towers can prevent injury and destruction by providing an early warning if such a fire erupts again.

“This program couldn’t be more important than it is now in the extreme drought,” said retiring Santa Barbara County Fire Chief Michael Dyer, who is responsible for spearheading the yearlong pilot. Last summer, conditions from the ongoing drought resulted in heightened fire restrictions in the area.

SCE crews recently attached nine “FlameSniffer” devices, which bear a striking resemblance to R2-D2, to towers high in the mountains above Santa Barbara. The cylindrical, dome-topped devices aren’t equipped with as many problem-solving gadgets as the celebrity droid, but they can still do a lot, Dyer said.

Spaced about a mile apart, each 14-pound FlameSniffer will keep a silent 24-hour vigil, “sensing heat, smoke, relative humidity and wind, then it can take a picture of what it is sensing,” Dyer said. “By strategically placing FlameSniffers on SCE towers, it will now enable us to see into the canyons and low-lying areas, allowing us to respond that much quicker if sensors get triggered.”

Soon, the devices will stream live data to communications hubs at Mission Canyon fire station and the county’s fire dispatch center. The data will also be available online to firefighters, aerial teams and SCE fire personnel. FlameSniffer CEO Cam McKenna, who was on hand for the installation, said SCE’s cooperation is critical to the pilot’s success.

“This project represents a significant step forward to combat the increasing threat of wildfire, and we’re grateful to the SCE staff who worked to make sure this pilot comes to fruition,” McKenna said. “In addition, it will benefit the homeowners throughout Mission Canyon by providing early fire detection resulting in an increased level of public safety.”

McKenna added that this is also the first pilot site for this type of ground-based, fire-prevention technology in the United States, as well as a first for a fire department or a utility to proactively combat wildfire through early detection and year-round climate analysis.

SCE Fire Management officer Troy Whitman, who was responsible for SCE’s involvement in the partnership, says the FlameSniffer pilot will benefit not only residents of the Mission Canyon area, but all SCE customers as well.

“This cutting-edge technology allows us to gather intelligence quickly and to respond to serve all of our customers’ needs,” Whitman said. “Protection of life, property and natural resources comes first, but early detection of fires may also prevent damage to poles and power lines that could result in extended power outages.”

The pilot required cooperation between SCE and the Santa Barbara County Fire Department, as well as agreements with the U.S. Forest Service and owners of adjacent private property. FlameSniffer is funding the $400,000 cost of the pilot, which includes $260,000 worth of equipment. 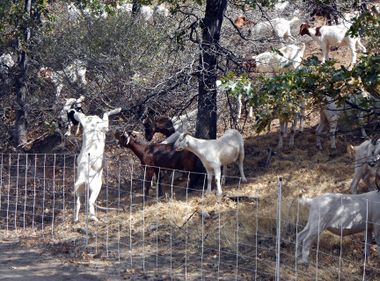 There’ll be a whole lot of munching and chewing going on this week up at Shaver Lake, one of the six major reservoirs in Northern Sierra’s Big Creek hydroelectric system. Visitors might see a herd of goats munching on thick brush, or a contraption...
View Story

In the thick morning fog that covered the mountains above Santa Barbara, a firefighter held up a barbecue lighter and gave it a flick. Twenty feet away, a small fire-detection device mounted on a Southern California Edison transmission...
View Story
View Comments
Leave a Comment