The central California city is eligible for $500,000 in incentives from SCE for its largest-ever capital project.
By Ron Gales
Subscribe

Water scarcity is nothing new in Visalia, a city about 45 miles southeast of Fresno.

Since 1991, Visalia’s City Council has enforced water restrictions. And for decades, water from the regional aquifer has been depleted faster than it can be replenished.

Part of Visalia’s long-term water conservation strategy is the upgrade of its water treatment plant. The upgrade will enable the plant to treat wastewater to a higher quality, producing recycled water that meets state and federal standards required for irrigation use. At $140 million, it’s the largest capital project in the city’s history, and possibly the most challenging.

The completed facility will also require much more power from the electric grid.

“We decided early on in the process to bring in Southern California Edison at the ‘ground floor’ as we designed the project,” said Jim Ross, Visalia’s public works manager.

Engineering, planning and design started nearly eight years before the project broke ground in April 2014. When the project was conceived, the goal was energy efficiency and a reduced carbon footprint.

“But after four years of the drought, the project became even more critical,” said Mark Okino, an account manager in SCE’s Business Customer Division.

Treating Visalia’s wastewater to the higher standard, while remaining energy efficient and moderating any hike in electricity costs, was a tall order. Yet, by participating in SCE’s Savings By Design program, the city is eligible for up to $500,000 in incentives by implementing energy-efficiency recommendations in the facility’s construction.

“Energy efficiency is the cheapest and cleanest method of supplying the growing need for electricity,” said Traeger Cotten, an SCE field engineer. “Incentives paid to Savings By Design customers help encourage efficient designs and help defray a portion of the costs associated with high-efficiency equipment.”

By implementing SCE’s recommendations, Cotten estimates the plant — which processes 12 million gallons per day — could reduce its energy consumption by more than 10 million kilowatt-hours annually.

Once the upgraded facility is online in April 2017, Visalia will be able to complete an innovative water exchange agreement. The city will provide the majority of its treated water — of high enough quality for farmers to use for irrigating their crops — to the downstream Tulare Irrigation District.

In return, the district will allocate potable water from its federal allotment upstream to Visalia who can then recharge the groundwater under the city. Visalia will also keep some of its treated water to irrigate its golf courses and some parks.

“All of this is being done by gravity,” said Ross, “so no electricity is needed to facilitate the exchange.” With SCE’s help, Visalia is taking wastewater that would otherwise travel outside the city boundaries and turning it into recycled water that benefits its citizens. 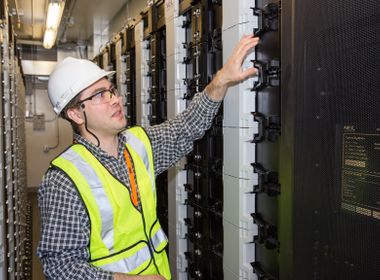 Tucked away in an undistinguished industrial park in Orange, California is a technological innovation that will never be mistaken for a smartwatch or the 5K television display. However, energy storage is no less important than sleek consumer electronic...
View Story
View Comments
Leave a Comment
Comments