Edison Support Boosts Education Programs at the Aquarium of the Pacific

Since the Aquarium of the Pacific opened its doors in Long Beach, Calif., in 1998, it has been on a mission to “instill a sense of wonder, respect and stewardship of the Pacific Ocean and its inhabitants and ecosystems.”

At the Aquarium each year about 1.5 million guests, including 200,000 students and teachers, can see as many as 11,000 animals in 50 exhibits. But more than simply a place to observe marine life, the Aquarium has been nationally recognized for its innovative approach to ocean education.

To that end, Edison recently provided a grant of $50,000 in support of the Aquarium’s high school education and VolunTEENS programs.

“With this support, thousands of high school students from throughout the greater Los Angeles area will have access to hands-on learning experiences and exposure to multimedia and technology-rich education,” said Lindsay Yates, the Aquarium’s grants manager.

Tammy Tumbling, SCE’s director of Philanthropy and Community Investment, said: “About two-thirds of the students who participate in the Aquarium’s high school education programs are from underserved communities, and serving that segment of our region is a key priority for Edison philanthropy.”

Edison International began its support of the Aquarium even before its doors were open to the public 16 years ago: It provided funding for the iconic life-size blue whale models suspended from the ceiling of the Great Hall. (The adult and baby whale are nicknamed Edi and Son.) Edison also supported the documentary film, Whales: A Journey with Giants, that is shown at the Aquarium.

In addition, Edison has contributed funding programs in two of the Aquarium’s most recent expansion projects: the Molina Animal Care Center and the Ocean Science Center.

Through the Aquarium’s VolunTEEN program, high school students ages 14-16 learn about marine life and the Pacific Ocean and get hands-on training in education interpretation and public speaking. The VolunTEEN program culminates with the students’ presentation of literary research projects.

“By creating a place where children and adults are inspired and their love of science is nurtured, the Aquarium can build a foundation for lifelong environmental stewardship and aspirations to become contributing members of the community,” Yates said. 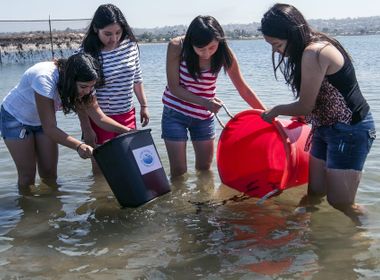 Almost every morning since the sixth grade, Samantha Cendro, 17, has been waking up at 6:30 so she can get in a couple of hours of surfing at the Huntington Beach Pier. “Surfing helps me relax,” said the senior who is a member of Huntington Beach High...
View Story

The sea otters at the Aquarium of the Pacific are always a big draw, delighting visitors with their antics in the water. What visitors don’t realize is the otter exhibit is also a showcase for energy efficiency. As part of its greening of the aquarium...
View Story
View Comments
Leave a Comment