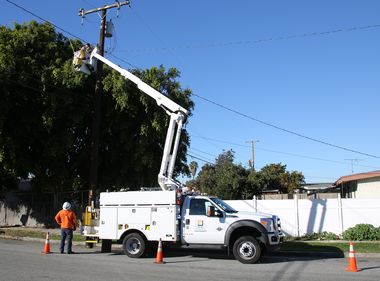 By 2030, every passenger car and small-to-midsize SUV in Southern California Edison’s fleet will be electric, the company recently announced. Additionally, the electric utility will convert 30% of medium-duty vehicles and pickup trucks, 8% of heavy-duty trucks and 60% of forklifts ...
View Story
View Comments
Leave a Comment
Stories : The Grid
Download Photos Download All

In celebration of National Drive Electric Week, Edison Electric Institute (EEI), a Washington, D.C.-based association representing investor-owned utilities, announced a nationwide push to increase the number of electric vehicles in utility fleets. The association projects that one-third of all vehicles and two-thirds of light-duty vehicles in utility fleets will be electric by 2030.

National Drive Electric Week, Sept. 26 to Oct. 4, is an annual nationwide effort to raise awareness of the many benefits of EVs. EEI, a sponsor of the annual event, said the fleet electrification goals demonstrate an expansion of the initiative the association launched a few years ago encouraging member utilities to commit to spending at least 5% of their annual fleet acquisition budgets on EVs.

“As an industry, it is critical that we lead by example, and our collective commitments to electrify our fleets both show our customers the path to clean transportation and sends a clear message to the automakers that our industry — and many others — are committed to an electric vehicle future,” said Pedro Pizarro, Edison International president and CEO and co-chair of EEI’s CEO task force on electric transportation.

Edison International laid out the 2030 goals for electrification of SCE’s fleet of more than 6,200 vehicles in its recently published 2019 Sustainability Report. The utility has already installed more than 370 charge ports at its facilities to meet the demands of its growing electric fleet and expects it will need about 1,300 more to achieve its 2030 goals.

More EVs in SCE’s fleet means cleaner air for customers in its service area, as well as a reduction in harmful greenhouse gas emissions for the planet. The company projects that its efforts will save more than 620,000 gallons of fuel annually and eliminate close to 6,000 metric tons of greenhouse gas emissions a year, or the same amount that would be saved by taking 7,600 cars off the road for a year or planting and growing nearly 600,000 trees for 10 years.

As an industry, it is critical that we lead by example, and our collective commitments to electrify our fleets both show our customers the path to clean transportation and sends a clear message to the automakers that our industry — and many others — are committed to an electric vehicle future.”

Last year, SCE spent 12% of its fleet acquisition spend on plug-in vehicles and 13% of its overall fleet incorporated plug-in electric technology. As it replaces gas- and diesel-fueled cars and trucks, SCE is actively moving forward on testing a wide range of EVs.

SCE plans on testing an electric pickup truck with an expected range of 250 miles per charge. The company is also in discussions with three big-rig manufacturers to begin tests of their electric models to see if they can replace the utility’s diesel semitrucks.

The announcement of fleet electrification goals are in line with the state’s direction on climate, given that Gov. Newsom last week issued an executive order requiring sales of all new passenger vehicles to be zero emission by 2035, as well as additional measures to eliminate harmful emissions from the transportation sector.

Learn more about how EEI’s member companies are leading by example at: eei.org/evs​.

Edison International President and CEO Pedro Pizarro will take part in a panel of electric company CEOs on “Preparing the Energy Grid and Customers for EV Growth” at noon PDT on Oct. 1.

Pizarro will be joined by Patti Poppe, president and CEO of CMS Energy, and Kellen Schefter, director of Electric Transportation for Edison Electric Institute, to discuss how electric companies are helping to accelerate EV adoption for all customers, from individual drivers to fleet operators.

Register for the session here.