The company’s 79 dams require constant monitoring and maintenance to ensure they withstand the tests of weather and time.
By Mary Ann Milbourn
Subscribe

When a downpour hit the Lake Thomas A. Edison reservoir in the Sierra Nevada Mountains last September, you would think there would have been rejoicing after four years of drought. But not for Southern California Edison’s dam safety team.

In the world of dams and hydrology, too much rain at one time can be as bad as not enough. The torrential rain etched gullies into the face of the earthen Vermilion Valley Dam, which blocks the water that creates the reservoir.

SCE engineers determined the damage had not affected the structural integrity of the dam. The material that had been washed away could be replaced as part of the routine maintenance of the structure, which is part of SCE’s Big Creek Hydroelectric System.

But that downpour was the kind of event that keeps SCE’s hydro team vigilant about ensuring the company’s system of 79 dams remain safe.

“We want to make sure these dams are in functional condition and reduce risks to the public,” said Bahram Safavi, a senior engineer in SCE’s Dam Public Safety group.

The dams and reservoirs are at the heart of SCE’s hydroelectric system, which dates back more than a century to when Big Creek was first built to bring power to burgeoning Los Angeles. The reservoirs also provide recreational opportunities like swimming, boating and fishing as well as water for cities and agricultural use in the San Joaquin Valley below.

Because of their importance to the company and the region, SCE strives to operate and maintain the dams in the most safe and effective manner possible. That work is highlighted each year on May 31, National Dam Safety Awareness Day, which commemorate the 1889 Johnstown, Pennsylvania dam failure and flood.

State and federal regulators conduct routine dam safety inspections. Among other things, SCE must demonstrate it can prevent water from overtopping the dam in an emergency by essentially pulling the plug on reservoirs and draining them safely through low-level outlets.

Independently of those inspections, SCE teams conduct their own field surveys of the structures and run sophisticated computer models to analyze the condition of the dams, many of which are 50 to 100 years old.

The effects of floods, rain, snow, drought and even earthquake activity are considered. For instance, the expansion and contraction of water that freezes in the reservoirs and within its structure in winter can take its toll on a concrete dam.

"We want to ensure that the dams are safe and functional and will continue to be an important part of SCE's hydroelectric power system," said Safavi. 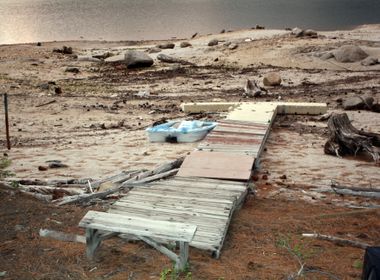 Usually by this time of year, Huntington Lake is full, awaiting the arrival of eager boaters and vacationers seeking refuge from the daily grind. But this year, because the winter snowpack in the Northern Sierra Nevada mountain rangewas only a tiny...
View Story