Measures to preserve California’s official reptile is a reflection of the utility’s emphasis on environmental stewardship.
By Paul Griffo
Subscribe

Take it from the hare in Aesop’s Fables. You underestimate the speed and agility of the lowly tortoise at your own peril.

That’s a lesson Southern California Edison construction crews had to keep in mind recently when they were building the 35-mile Eldorado-Ivanpah Transmission Project, which runs through the heart of desert tortoise country in the Mojave Desert.

“People think of tortoises as slow moving, but they can be pretty fast,” said SCE senior biologist Jack Goldfarb, a member of the utility’s 16-member Biological Resources Group, which is dedicated to mitigating SCE’s impact on wildlife.

To a desert tortoise baking in 110-degree summer heat, the shade beneath a heavy-duty work truck parked at a construction site can be awfully inviting.

“And they can move across a road and get under your car very quickly,” said Goldfarb. “Within just a minute or two from the time you park, you can have a number of them under your truck. That’s why it’s important to check.”

Because the desert tortoise has been designated a threatened species by both the state and federal governments, accidentally harming even one could have temporarily shut down the entire $440-million, Eldorado-Ivanpah project.

And with as many as 100 trucks involved in the project on any given day, crushing a tortoise by simply driving away from a work site was an ever-present risk.

Happily, that didn’t happen because of safeguards that were put in place during the year and a half that it took to complete the project. For example, drivers were provided orange cones displaying “LOOK OUT FOR TORTOISES” to place next to their vehicles every time they parked.

“It’s easy to forget and just drive away,” Goldfarb said. “So instead of just saying, ‘Be sure to check under your truck,’ there is the added step of having to bend down to pick up the cones before getting back into your vehicle.”

The cones are but one example of how SCE goes the extra mile to protect the environment, he said. “While compliance is important, we will go above and beyond whenever possible because at SCE, we want to be good environmental stewards.”

Once plentiful in California, the desert tortoise — Gopherus agassizii — was often kept as a backyard pet. But the population of the official California state reptile has shrunk more than 90 percent, leaving only about 100,000 in the Mojave and Sonoran deserts and putting it on threatened species lists.

But state and federal restrictions that protect a threatened species can be a challenge, especially if you’re trying to upgrade 35 miles of transmission lines between San Bernardino County and Boulder City, Nevada.

“We found tortoises where you would not expect to find them,” SCE project manager Roger Schultz said. “On the sides of cliffs. On the tops of peaks. And you’d shake your head and say, ‘How did that get up here?’”

When a tortoise happened to wander onto a work site, a trained biologist had to be called in to remove it. A scared tortoise will wet itself, which could cause it to die of dehydration if it can’t quickly find a source of water.

And if a desert tortoise burrow was discovered, it meant either moving the site a few feet or calling in a biologist to inspect the burrow for tortoises, then collapse the burrow.

The 18-month-long effort required a team of environmental monitors from both inside and outside SCE, including state and federal officials.

“Everyone was on board and everyone was really flexible,” Schultz said. “We tried to make the monitors part of the construction team. If there was an obstacle, we’d all come together to figure out how to get the work done.”

As an additional precaution, spotters were assigned to work trucks to help drivers avoid running over tortoises that were trying to cross the road.

“If you look at the coloration of the tortoise in the road, it blends in pretty well,” Goldfarb said. “And if you’re driving, it can be pretty hard to see. So every truck larger than a pickup had a spotter riding shotgun.”

Such measures to minimize the utility’s impact on the desert tortoise were critical, he said, because without intervention the species will become extinct.

“It took a lot of effort and resources to get the project built on time, within budget and in compliance,” he said. “During construction we did not harm or injure any tortoises, so that was a tremendous success.” 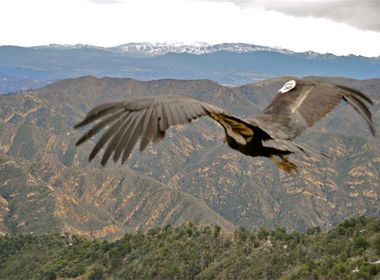 They won’t win a beauty contest, but California condors are very impressive birds. With wings sometimes spanning nearly 10 feet, they’re the largest flying birds in North America. They can soar as high as 15,000 feet and as fast as 55 mph and they...
View Story 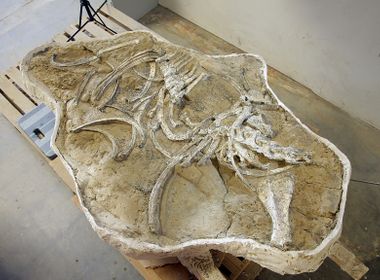 Major SCE Fossil Find to Get Its First Public Viewing

For more than a million years, the bones lay out of sight, buried under layers of sediment that had accumulated over the eons in San Timoteo Canyon in Riverside County. It was only through a lucky twist of fate that they came to light in 2009 when...
View Story
View Comments
Leave a Comment
Comments