Fleet investment in electric vehicles is in line with the company’s commitment to clean-energy technologies.
By Paul Griffo
Subscribe

Southern California Edison is investing in a new generation of environmentally friendly service trucks whose overhead lifts are powered by the same kind of batteries used in plug-in electric cars.

SCE recently took delivery of two of the lithium-ion-battery-equipped troubleman trucks — so named because they are used by troublemen, experts who are dispatched to investigate the causes of power outages — and 22 more are on the way.

“This purchase is part of SCE’s commitment to electric transportation, which is one facet of our overall vision for a modern grid that will support consumer use of clean-energy technologies and help California meet its clean-energy goals,” said Laura Renger, SCE principal manager of Environmental Affairs and Compliance. “At SCE, we’re not just encouraging others to consider electric vehicles, we’re leading by example.”

The new system allows troublemen to fully shut down the truck’s engine while work is being done, making the trucks safer, quieter, more fuel efficient and better for the environment. The batteries also allow the trucks’ air conditioning, lights and two-way radios to be operated while the engine is turned off.

Without batteries, the lift’s hydraulic system would be powered by the truck’s transmission, requiring the vehicle to idle during operation.

This year, SCE anticipates spending 20 percent of its annual fleet budget on plug-in electric vehicles, according to Todd Carlson, SCE principal manager of Fleet Management. SCE has more than 400 troubleman trucks in its fleet that could potentially use the new lithium-ion battery system, as well as nearly 300 larger bucket trucks used by repair crews. A few of the larger trucks with a similar battery system have also been added to SCE’s fleet.

“These trucks will not have to idle their engines for the first few hours that crews are working, leading to reduced fuel consumption, lower emissions and reduced wear and tear on engines,” Carlson said, noting that the trucks are also equipped with stop-start technology to automatically turn off the engine five seconds after they are put in park.

No one needs to sell Lisa Rosen on electric vehicles. She and her family have owned EVs since they first came on the market in 1997. They believed so much in EVs that Rosen’s son...
View Story 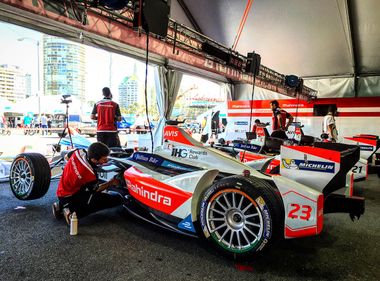 For Southern California Edison, the recent Long Beach Formula E race was an opportunity to get behind an event that will help accelerate advances in electric vehicle technology —...
View Story
View Comments
Leave a Comment
Comments