The apartment community serves 100 limited-income families and recent efforts to implement energy upgrades, including a solar rooftop system, have helped to build community, benefit residents and strengthen the neighborhood.

The nonprofit LINC Housing Corporation purchased the Lancaster apartments in 2002 to preserve affordability for limited-income families over the next 55 years. Once known as “crack alley” by local residents, this community in Lancaster has seen major changes for the better, including physical improvements to the apartments and common areas and a new name. Today the community is known as the Village at Beechwood.

“In 2014, we kicked off work at the community to continue improvements and energy retrofits to improve conditions for our residents, as well as striving to reach the goal of creating near net zero multifamily, low-income housing,” said Samara Larson, director of Sustainability with LINC Housing.

The $2.46 million project at the Village at Beechwood includes engineering, research and construction for energy-efficiency upgrades and renewable energy. The project is also testing innovative and scalable approaches in the multifamily market, including progress toward near net zero retrofits and systems to document energy savings.

“This project is ambitious as we were looking at retrofitting older construction as well as working with residents living in the apartments,” added Larson.

Improvements included the addition of a solar water heating system and the installation of an 84-kilowatt rooftop solar system on the community’s shared roof. The retrofits included energy-efficient appliances, sealing ductwork and the addition of insulation. Programs also help residents better manage their energy usage.

Grants from the California Energy Commission, the U.S. Department of Housing and Urban Development, financial contributions from LINC and from partners such as the Southern California Gas Company and SCE are making the improvements possible. The project will receive roughly $160,000 as part of the Multifamily Affordable Solar Housing Program.

“Not only do the dollars from SCE make it financially feasible to install the solar rooftop system,” said Larson, “our participation in their program allows the benefits from the community rooftop system to appear as bill credits on the individual electricity bills for each resident, allowing us to pass the benefits of the system directly to our residents.”

This year, SCE has received applications worth more than $27 million in one day for the Multifamily Affordable Solar Housing Program. SCE continued to accept applications until about $18 million in applications were submitted, generating a waitlist if funding becomes available or projects fall out. All available MASH funding is now reserved.

“We are very happy to see that customers are seeing the benefit of participating in the program and that we are able to help bring the benefits of this technology to underserved communities in our territory,” said Aileen Lagbao, SCE program manager for the Multifamily Affordable Solar Housing Program. “It is just one more way in which we support solar development in Southern California.”

In an age when the American electric power system is undergoing transformative, disruptive change, one of the foremost disruptors shared a stage Monday with a utility industry leader for a conversation about the future of electricity,...
View Story 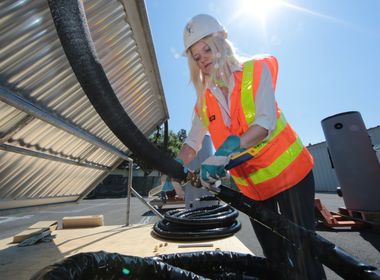 Steel toe work boots. How hard could it be in Southern California to find work boots? But it was for Reem Habib. “When I tried to buy steel toe boots, I couldn’t find any in my size — they had no women’s sizes,” she said. She settled for a smaller size...
View Story
View Comments
Leave a Comment