When Juan Medina left Mexico in the early 1970s to pursue his American dream, he kept in touch with his family with a pen and paper. Back then, his modest family had no phone in their home.

Since then, Medina, now in his 70s, has worked hard and is embracing technology. On Nov. 25, he became the 50,000th Southern California Edison customer to install solar panels on his home and be connected to the grid this year.

“I may not be into computers or cellphones the way my kids are, they use their phones for everything,” said Medina, “but I do believe that we have to try new things and so I decided to go ahead and have solar installed on my house when I got the opportunity.”

A local company had approached Medina in the summer about installing solar panels on his rooftop. After completing his paperwork and working with his contractor, the panels were installed this fall in one day. Two weeks later, the contractor and city of Hanford staff returned to the home to inspect the panels.

The installation was approved by the city and all needed documents were submitted to SCE for interconnection to the grid. Six days later, SCE issued a permit to operate the solar panels and Medina was up and generating power.

“This year, we have already connected upward of 9,000 more solar homes than in all of 2014 and have put in place systems that have reduced the time it takes for a customer to get connected to the grid,” said Gary Barsley, manager for SCE’s Distributed Generation Programs. “Once they have all their required documentation in, customers now see an average time of only seven days till they are interconnected to our system.” 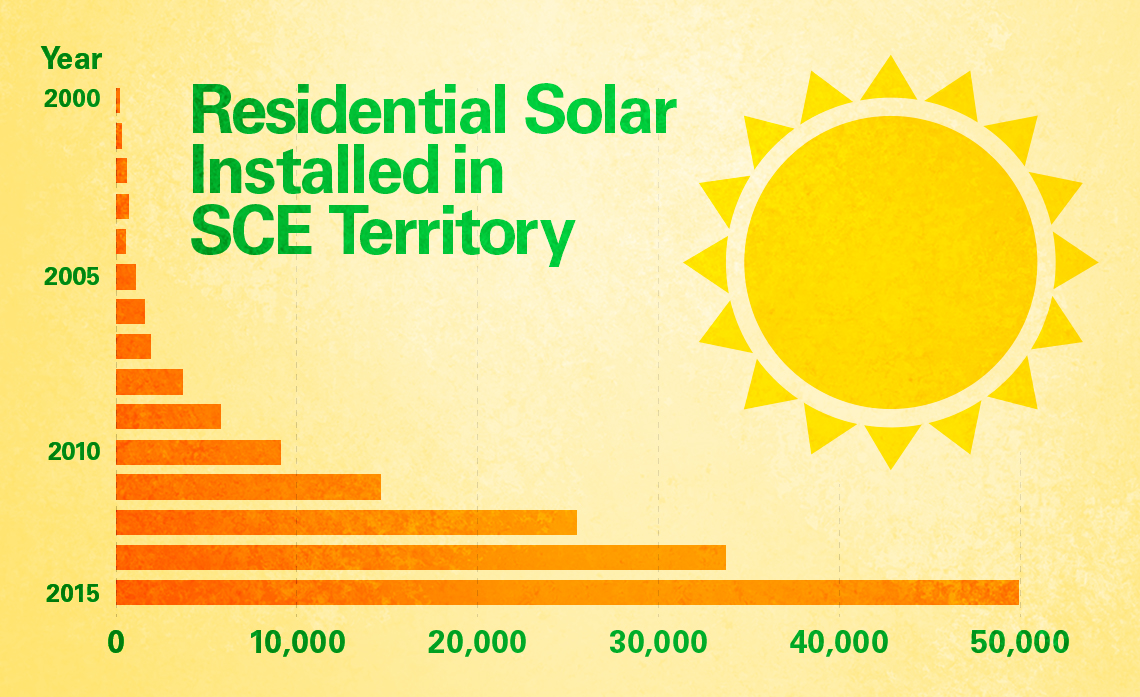 The utility has worked to continue making improvements in its distribution infrastructure to accommodate additional residential solar installations as well as working with contractors, installers and customers to make the process more automated and streamlined.

“Rooftop solar is definitely part of California’s energy future,” said Barsley. “We embrace it and as it grows across our service territory, we are here to provide the infrastructure and easy-to-understand processes that customers need to adopt this new technology.”

SCE has connected about 150,000 solar residential customers to its grid in the last 15 years. At first, the numbers trickled in. But in the last few years, they have grown rapidly as the price of solar has decreased and the solar industry has matured. This has resulted in one-third of those customers being connected to the grid this year alone with a few weeks to go.

That trend can be seen all over the state, not only in major population centers, but also in towns like Hanford in California’s Central Valley.

“The process was really very simple and went very fast. Being retired, it is important to me to save all I can to make ends meet,” said Medina. “You know, I still don’t have a cellphone, but I like knowing that I try to learn new things and that I am trying out this new technology.

“Perhaps next year, I will buy a computer and give that a shot as well.”