April 18 is National Lineman Appreciation Day. The occasion was first recognized by the U.S. Senate on April 18, 2013, in an effort to honor the linemen profession and the contributions of these brave men and women who protect public safety. 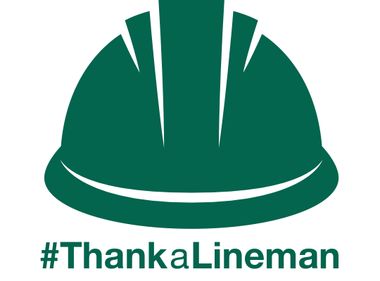 ​Linemen are often the first responders on scene during storms or other emergencies and work tirelessly to restore power for customers as quickly and safely as possible.

Join us in celebrating linemen by sharing a photo or experience of how a lineman has made an impact in your life and share it on Facebook, Twitter or Instagram using the #ThankALineman tag.

Here’s a few shareable social sayings to help get the appreciation trending:

"Well, my story has nothing to do with electricity, but definitely about awesome linemen. I was traveling on the westbound 10 freeway early one morning in stop-and-go traffic and my vehicle literally quit running with no momentum to get to the shoulder. You can imagine ... PANIC. Before I could even gather my thoughts, three linemen in their big SCE truck pushed me to the side and made sure I would be OK before they were off on their journey for the day. I did a little detective work and ended up writing a rah-rah letter to SCE to let them know how awesome they were to me. I also included some In n Out gift cards for them. So, even though no electricity involved, I was SO thankful for those linemen that day. I hope they read this and say, 'Hey, that was me!!!'"
- Marilyn K Bailey, Facebook

"My husband is an Edison lineman. He has worked countless hours, missed numerous holidays, been gone for weeks at a time. He has helped restore power after disasters such as Hurricane Katrina, Sandy, etc. He is our hero. He works hard to provide a great life for myself and our two daughters."
- Danielle Campbell, Facebook

"I'm very, very proud of my lineman son. Everyday presents challenges. Everyday he faces unexpected danger. One day he and one other guy were working a line in rural Texas. When they took a quick break, his buddy grabbed a snack and immediately began to choke on it. I'll spare you the graphic details of a big guy choking to death in the middle of nowhere. My son, the smaller of the two, used the Heimlich Maneuver 10 times (!) to finally dislodge the object. These guys are highly trained in many aspects of the job. He said that after they (literally) caught their breath and calmed down, they got right back to work."
- Cindy Safholm Camara, Facebook

"My dad was a lineman, my husband was a lineman, and now my two sons are beginning their careers as Edison linemen. So proud of all of them. Nothing like having Edison family. Thanks for keeping the lights on!"
- Cheryl Gill Pivovaroff, Facebook

"I work for the fire department and we 100% appreciate the hard work and long hours they put in. They make it look easy."
- Tim Carr, Facebook

"A few years ago, my power was out for five days. The entire square block was out, though all the surrounding streets had been restored two days earlier. Edison evidently didn't know that the power was still out, because I saw a lineman on a pole and asked him if he was going to fix the power. He was surprised! But he was so nice, and said he thought he knew what the problem was and if he was correct, he would fix it in a half hour. And a half hour later, we had our power back. He wasn't from SCE, he was a contractor (from San Diego, I think) who had been brought in after the windstorms, but he was a godsend."
- Laura Monteros, Facebook

"My father retired from SCE in 1983 after 35 years of being on line crews in one position or another. Being the breadwinner of the family with a very ill daughter and four other children he never missed a day at work except for one major surgery he had. I remember him working storms for days on end - in the cold, wind, snow and rain. He never complained - EVER. He supported us financially, emotionally and never missed any of mine or my brothers sports (unless he was working out of town) and taught us all the meaning of hard work. I want to thank him and all of the SCE line crew employees that follow him. You are all truly employees to be honored and respected."
- Paula, Inside Edison comment