Looking Back From the Future

It is June 21, 2030, the longest day of the year, and it is going to be a scorcher. Fifteen years ago, Southern California Edison might have had to turn to peaker power plants that run on fossil fuels to keep customers cool on long, hot days. Today, however, the power grid is running safely, reliably and efficiently, bolstered by customers’ widespread adoption of clean-energy technologies.

California has met the 2030 environmental goal to reduce greenhouse gases to 40 percent below 1990 levels, and is on its way to reducing greenhouse gases to 80 percent below 1990 levels by 2050. This year, 50 percent of California’s energy portfolio comes from renewable resources, and even more renewable energy is produced on the distribution network, mainly from rooftop solar panels.

Over the last 20 years, there has been a dramatic change in how customers use and interact with the electric grid. Customers in the 2010s had very little choice in how they consumed electricity, and very few customers had the opportunity to participate as electricity producers. Today, however, “prosumers” who might have solar panels on their rooftops are compensated fairly for their contributions to the grid and also pay their fair share for their use of the grid, both to buy and sell energy.

Customers who access battery storage systems can control their costs by storing energy from the grid during lower-cost hours and then using this energy during more expensive, peak hours. These energy decisions allow customers to actively contribute to California’s cleaner air and reduced greenhouse gas emissions.

In 2030: New and evolving clean-energy technologies have set the stage for the customer-centric grid of today. These technologies are collectively known as distributed energy resources or DERs. They include energy efficiency, demand response, electric vehicles, renewable energy and energy storage. All of SCE’s customers have an opportunity to use DERs, and their participation reduces California’s carbon footprint and can save them money. Nearly 2 million customers are driving electric vehicles. 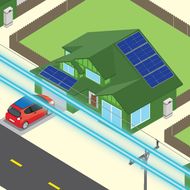 Anthony is a homeowner in a Zero Net Energy housing development in Fontana, California, which was built in partnership with SCE back in 2015. He and his son, Eli, will be out all day, so he has made an energy choice; instead of using his rooftop solar panels to cool his home, he has programmed his smart energy management system to sell the solar energy he generates back onto the grid. His solar power is valuable to the grid because his home is located in an area where this energy can be used to power other homes. Anthony’s solar energy provider has aggregated his solar energy with that of other owners of rooftop solar panels, and SCE is managing the grid to optimize this power. Anthony will rely on the energy-efficient design of his home to keep it cool while he is out. His home features increased wall and attic insulation, high-efficiency lighting and an electric water heater. 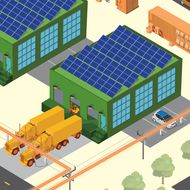 Jessica is the quality control manager at Acme Industries. Jessica pulls in to Acme’s parking lot, which is equipped with electric vehicle chargers, installed in coordination with SCE’s Charge Ready program. She plugs in, opting into the demand response program. Her car might stop charging temporarily later in the day, when there is extreme demand on the grid, but it will be fully charged by the time she leaves work. SCE has built and owns a space-efficient battery storage system in a shipping container in Acme’s storage yard. Today, Jessica will be product testing. When the testing prompts unusual high intensity demand on the grid, the battery storage system is automatically triggered to add power, ensuring consistent voltage levels and flow. Solar panels on Acme’s roof also provide renewable energy, which keeps the cost of air conditioning down, helping Acme to meet its budget goals. 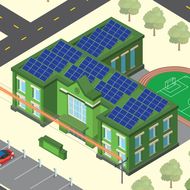 Will is a renter and a student who lives in subsidized off-campus housing. The rent is kept affordable, in part, by proceeds generated from a community solar project that is connected to the SCE distribution grid — a partnership between the college, which wanted to add renewable resources as part of its sustainability program, and SCE, which is using local generation to defer installing more circuits to meet the increased customer need. The community solar project generates revenue for the college and provides benefits to the distribution grid. Because the cost of electricity and other utilities is included in his rent, Will benefits from the solar panels without any personal actions or investments. Will gets around town in an all-electric city bus — which is quiet and clean, allowing him to study or listen to music without the sound cranked all the way up. 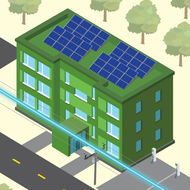 Leticia lives with her daughter, Jade, in an apartment in a neighborhood that is designated as a California disadvantaged community (DAC) and she qualifies for SCE’s CARE discount. Leticia doesn’t have a rooftop for solar panels, or own her own car, but she is also benefitting from California and SCE’s grid modernization efforts. The air has been so much cleaner since the state achieved its 50 percent renewable energy goals that Jade can now enjoy school and sports without worrying about asthma attacks. And, Leticia has noticed that her electricity is much more reliable than it used to be. Since a wire replacement program upgraded neighborhood circuits from 4 kilovolts to 16 kilovolts, outages caused by weather, car accidents or service interruptions have been brief and rare. 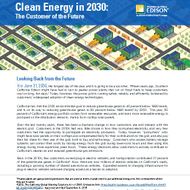 In 2017, SCE is exploring how to increase customer choice and ease of use. New technologies, new partnerships and a new way of operating are essential. SCE advocates a thoughtful, three-step approach to reinforce and modernize the grid, create new revenue opportunities and allocate the benefits and costs of this transformation appropriately.

For more information on how SCE plans to make this vision a reality, please read our white paper, Clean Energy in 2030: The Customer of the Future.

More information on grid modernization at SCE is available at: Edison.com/TransformingtheGrid.