A new pilot project by SCE and The Climate Registry is recognized for helping agencies save water to reduce electricity and greenhouse gas emissions.
By Mary Ann Milbourn
Subscribe

The White House on Tuesday recognized initiatives to save water nationwide, including a joint pilot program by The Climate Registry and Southern California Edison that will help water agencies also reduce energy usage and cut greenhouse gas emissions.

The Climate Registry-SCE pilot program begins this month. It is designed to provide a benchmark for water agencies in SCE’s service territory to document their reduction in water usage and greenhouse gas emissions.

Steve Galanter, SCE principal manager of Engineering Services who is overseeing the pilot program, pointed out the close tie between water usage and electricity, known as the “water-energy nexus.”

The transportation, treatment and disposal of water and the energy used for heating and consumption account for nearly 20 percent of the total electricity used statewide, according to a study done for the California Energy Commission.

“Edison is on the forefront of energy efficiency and reducing greenhouse gas emissions,” she said.

About a half dozen Southern California water agencies are expected to participate in the pilot project. The goal is to standardize the Climate Registry’s methods for measuring and reporting greenhouse gas reductions so water agencies can submit data that is comparable, transparent and verifiable, Holm said.

Once the benchmark standards for reporting are established, the plan is to expand the program to other agencies and develop incentives and rebates to encourage them to participate.

The water program is an outgrowth of the Climate Registry-SCE Cool Planet Project. That program encourages SCE’s large industrial customers to install projects to reduce electricity and greenhouse gas emissions. 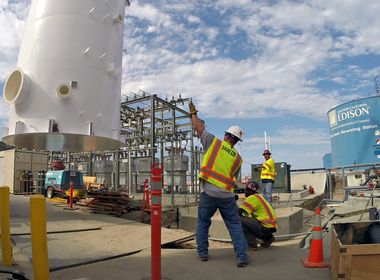 Greg Goran grew up surfing the waters off Huntington Beach. Over the past 35 years, he has seen a noticeable change in the water — it’s much dirtier. “Urban runoff is the No. 1 source of ocean pollution and a primary reason why the water is so much...
View Story
View Comments
Leave a Comment
Comments