Maintenance crew is the peace of mind behind SCE's helicopter fleet.
By David Song @SCE_DavidS
Subscribe

Like the precision of a surgeon, lives often depend on the dexterity and professional competency of Southern California Edison helicopter mechanics.

The team of seven mechanics overseeing SCE’s helicopter fleet based out of the Chino Air Ops facility often feel the weight of their responsibility.

“The work really doesn’t stress me out,” said Don Southworth, an SCE employee for 41 years and a Vietnam veteran. “We have a standard and process for the way we work and we don’t let the challenge of the job scare us.

Others admit the responsibility weighs heavily on them, but embrace it.

“I think pressure can be good,” said Corey Martens, an SCE employee of five years. “People that don’t have any stress in their lives don’t necessarily have motivation to get out of bed. It’s important to understand that you have purpose.”

More than a responsibility, the crew approaches their job as a privilege. It’s a dream vocation that has a family atmosphere.

“The job is fulfilling,” said Southworth. “There’s no doubt that the work is challenging, but it’s also very rewarding at the same time.”

Every SCE helicopter in the fleet comes down for maintenance after a few dozen hours in flight, requiring different types of inspections year-round, while maintaining standards that are best in class for the aviation industry.

The work also has seasons and cycles, but the routine is anything but mundane.

“I compare it to a first responder where you never know what the day is going to bring you until you get here and get tailboarded,” said Zarehm Edior, the rookie of the bunch with three years at SCE. “Things change day to day, hour to hour. What we are working on Monday can change and by Friday we’re working on an entirely different issue.”

“The job has its consistencies, but it is different,” Martens added. “Tomorrow, I’m going to Mammoth and working what we call ground support. It’s nice to get out once in a while.”

As cliché as it sounds, it’s the teamwork that makes it easy for these unsung mechanical surgeons to come back to the hangars each day.

“I like the camaraderie that we have with everybody and it’s a family and we treat it as such,” said Jeffrey Gunn, a veteran of 33 years. “The work is fun — we wouldn’t do it if we didn’t like it — but we care about everybody. Every person that’s come in, they’ve built on this culture.” 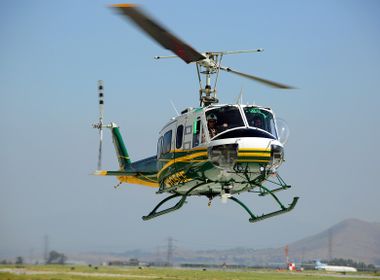