You may not have heard of Huy Fong Foods, but you’ve most likely tasted the company’s popular Sriracha Hot Chili Sauce. Each year, the California-based company makes enough hot sauce to fill five Olympic-size swimming pools.

Owner David Tran first started the company in 1980 in a small Chinatown shop. By 2010, it had grown so popular that it moved into a 650,000-square-foot facility in Irwindale. And Southern California Edison played a role in ensuring Huy Fong Foods stays in its service territory.

“We thought SCE only worked with electricity and we weren’t aware of the other services,” said Donna Lam, Huy Fong Foods executive operations officer. “SCE came forward to help our business stay in California.”

Chili sauce maker Huy Fong Foods has a 650,000-square-foot facility in Irwindale and has 150 employees. The company partnered with SCE to save $100,000 per year on their electricity bill.

Huy Fong Foods worked with SCE’s Business Customer Division on a rate analysis that showed the company could save $100,000 per year on its electricity bill. Keeping the company in SCE’s territory also saved more than 150 local jobs.

When the company was contemplating moving its operations out of the state, SCE helped the company convince local officials of its economic value to the region. SCE’s Customer Service Economic Development Services stepped in to provide an economic analysis.

The data showed the company’s forecasted impact on job growth and tax revenue at the city, county and state levels. This helped to demonstrate Huy Fong Foods’ benefit to the community and made a case for the company to expand in Irwindale. It also helped resolve the permitting challenges.

“We provide valuable tools and services to make our large business customers more competitive,” said SCE Economic Development Services manager Mike Nuby. “We’re very proud of the work we do. We’re committed to helping our customers take advantage of everything California has to offer.”

Huy Fong Foods has now been in Irwindale for more than four years. The company continues to grow, even after a lawsuit last year brought by the city of Irwindale complained about the smells from the facility. The lawsuit was eventually dropped.

The business today is a far cry from Tran’s early days of selling his chili sauces from his blue Chevy van from San Francisco to San Diego.

“My American dream was never to become a billionaire,” Tran is quoted on the company’s website. But the former Vietnamese refugee is definitely an example of the American dream. 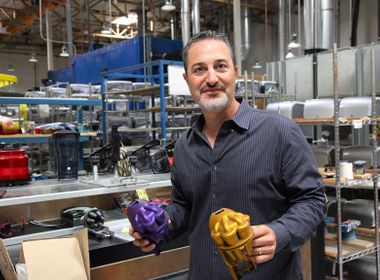 You may not have ever heard of Michael Shamassian, but if you own a cellphone, drive a car or have watched the Tour de France, you’ve probably seen his work. For more than 20 years, Shamassian’s Shmaze Custom Coatings in Lake Forest has been designing...
View Story
View Comments
Leave a Comment
Comments