Safety Deserves a Place at the Thanksgiving Table

Keep an eye on what you fry … or grill … or broil. And never leave stovetop cooking unattended.

This is true all year but especially on Thanksgiving Day, which has three times more home fires than any other day largely because of unattended stovetop cooking, according to the National Fire Protection Association.

In its most recent report, the fire association said 1,550 cooking fires occurred on Thanksgiving in 2013, marking a 230 percent increase over the daily average of 470 cooking fires that year.

“People might want to leave or even run to the store,” said Randall Wright, an inspector and nine-year veteran of the LA County Fire Department. “It’s not worth it. We never want to leave the stove unattended or leave the home with any cooking appliances on. Either turn them off or have someone else watch them for you.”

More than 60 percent of cooking fires start on stovetops and about one-third of them result from unattended cooking. On Thanksgiving, these fires cause an estimated 10 deaths, 50 injuries and $28 million in damage.

Wright, however, cautions that “when there’s a grease or electrical fire, don’t put water on it.” Instead, start by putting a lid atop a burning item, turning everything off and having the fire extinguisher ready if it spreads.

“Frayed or worn cords are dangerous in a couple of ways,” said Don Neal, director of Corporate Health and Safety at Southern California Edison. “They, of course, could potentially spark a fire, but they also no longer offer people protection from shock or serious injury. Bad cords should be replaced immediately.”

Never plug more than one large appliance into an outlet and never plug large appliances such as refrigerators or space heaters into extension cords that should also only be used temporarily.

All countertop appliances should also be plugged into Ground Fault Circuit Interrupter (GFCI)-protected outlets in addition to being placed away from the sink. And people should never disconnect their smoke detectors while cooking.

“From entertaining to talking on the phone, checking emails or watching television, distractions should never compromise safety while cooking this Thanksgiving or on any day,” said Neal. 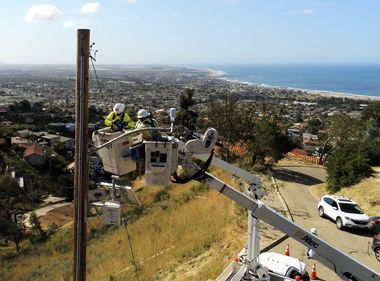 While planting trees can help mitigate climate change, trees also pose a risk of sparking a wildfire when they’re too close to electric power lines. As a result, utilities worldwide are spending increasing amounts of money on vegetation management ...
View Story 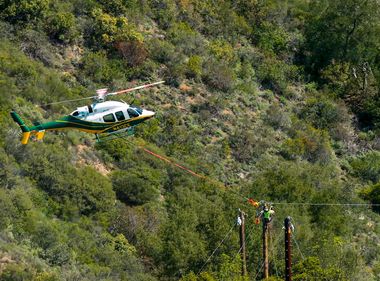