Jack of All Trades

SCE retiree makes a second career out of his love for restoring classic cars.
By Justin Felles
Subscribe

Jack Sherman bought his first car when he was 13, a 1939 Chevy Master Deluxe that would begin a lifelong hobby restoring classic cars and eventually a side business for the Southern California Edison retiree.

“I like whatever I can make money on,” Sherman said with a smile, adding he’s never had a bust on any of his restorations.

His driveway is his shop. Standing outside his garage, Sherman hopped in his current project — a 1931 roadster — turned the key and the engine rumbled to life. A deafening roar echoed through the nearby alley.

“This is car number 81,” he yelled through the noise. That’s how many cars he’s restored, almost entirely on his own, and sold for profit.

He found the roadster in Grants Pass, Oregon. A husband and wife had started restoring it together until the husband passed away. It sat for four years until the wife, now 84, decided it was time to sell. Sherman drove to Oregon and trailered the car home.

Sherman does everything from upholstery to wiring to engine work, except paint. He said this latest project should take 11/2 years to finish.

As a teen, Sherman worked as a soda jerk for the Mava Paint Company in Corona, California. “Back when everyone cruised, they’d end up at Mava,” he said. It was there that his passion for cars started to build.

After college, with a degree but no job, Sherman started restoring cars for money.

“Before the web, no one knew the real value of cars so it was easier to make money,” Sherman said. “It’s a bit harder these days.”

He never intended to make a career out of car flipping though, so he’s had a number of jobs over the years. He worked as a special education teacher and a casket maker, founding his own business, Sherman Casket Company, before coming to Southern California Edison.

“I had a friend who worked for SCE in steam generation who said Edison was hiring at the Redondo Beach Generating Station for plant equipment operators. I was one of 400 applicants,” he said.

His SCE career lasted 25 years before he retired in 2010.

All the while, the cars kept coming … and going. Some have been shipped across the world to Switzerland, Belgium and France.

“They love Mustangs in France and Camaros in Belgium, so I often tripled my money there,” said Sherman. Only one has he held onto, a 1967 Mustang that he’s had for 18 years. “This one’s staying with me to the end,” he said.

Sherman now has an apprentice following in his footsteps, his 5-year-old grandson Miles.

“I got him started when he was 3 helping me sand cars. He keeps me busy,” Sherman said. 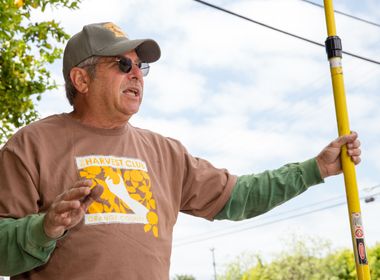 In Orange County, about 60 percent of homes have a fruit tree in the yard producing fruit every year — too much for the average family to consume on their own. Jeff Lebow — a Southern California Edison (SCE) retiree — noticed this and saw an...
View Story 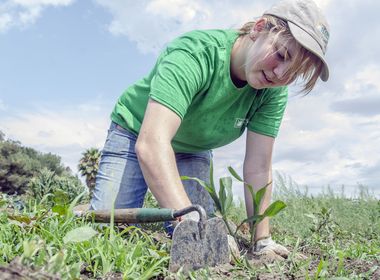 Urban Farm Gets TLC From Volunteers

Between a hotel, fast-food burger joint and the 60 Freeway sits an unusual patch of greenery — the Earthworks Farm & Community Garden in El Monte, California. El Monte is a “food desert,” meaning the city lacks places where residents can buy healthy,...
View Story 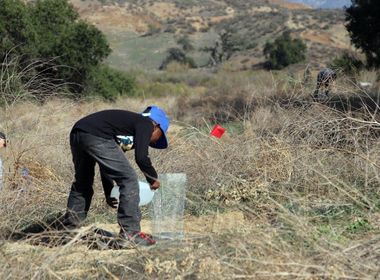 In the picturesque Cienega Canyon Preserve in San Timoteo Canyon, squirrels and deer, and a variety of birds and insects, rely on the oaks in the area for food and shelter. But...
View Story
View Comments
Leave a Comment
Comments