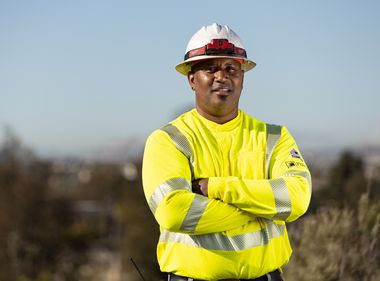 When Terrance Bynum graduated from high school, he started working in printing. His brother, Albert, who is five years older, was working as a groundman at Southern California Edison and making a good living. ...
View Story 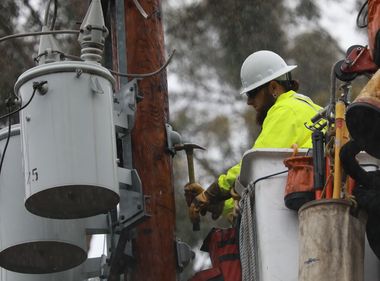 As the world emerges from a challenging year, Southern California Edison and its employees honor and thank the hardworking crews this April 18 on National Lineman Appreciation Day. ...
View Story 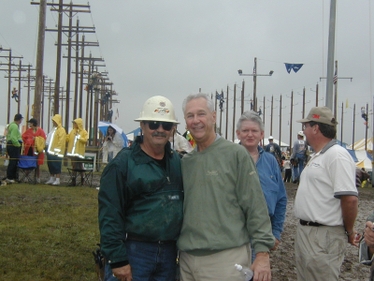 When Terrance Bynum graduated from high school, he started working in printing. His brother, Albert, who is five years older, was working as a groundman at Southern California Edison and making a good living. ...
View Story

As the world emerges from a challenging year, Southern California Edison and its employees honor and thank the hardworking crews this April 18 on National Lineman Appreciation Day. ...
View Story

In 1966, Pat Lavin first became a member of IBEW Local 9 in Chicago working during the summer for a signatory contractor. When he joined the U.S. Marines in 1969, his grandmother continued to pay his union dues during his three years of service. ...
View Story
View Comments
Leave a Comment
Comments
Stories : People
Download Photos Download Video Download All

Edison International recently launched its first lineworker scholarship to help increase diversity. The initial focus will be on Black participants.

Athennia, 10, Eric Jr., 9, and Aliyiah, 7, know that when there is a storm or a wildfire, their father, Eric Jones, a field supervisor for Southern California Edison, is going to be very busy and may be called out to work at night.

“I tell my kids, we need to get the lights back on for the kids who don’t have lights on right now,” said Jones, who has worked at SCE for 21 years. “My kids now understand the importance of what I do and tell me, go ahead and help get the power on.”

Helping customers get their lights back on is only part of what Jones finds rewarding about his job. As a former meter reader, groundman, apprentice, lineman, e-crew foreman and now field supervisor, it is something he has been doing for almost two decades.

Now overseeing about 50 crew members out of the Monrovia District, Jones spends his days out in the field making sure his crews perform the work safely and in compliance with rules and regulations. He is also there to support his e-crew foremen as the crews repair and upgrade electrical equipment, such as power lines, poles and transformers.

“Safety is a big deal for us,” he said. “Linework is very rewarding. It can also be dangerous. My No. 1 priority is to make sure crew members get home safely to their families. The camaraderie with the team builds trust in me and trust I have in them.”

Jones first learned about lineworker jobs at SCE through a former co-worker. He hopes that through Edison International’s recently launched lineworker scholarship more diverse candidates will look to a career at SCE.

“Someone took the time to introduce this job to me,” he said. “I want to tell others that if you like construction, teamwork, this job has been good for my family.”

Those interested in applying for the lineworker scholarship can visit edison.com/eixlineworkerscholarship and apply online. Scholarship winners will attend Los Angeles Trade-Technical College’s six-month program to receive a Powerline Mechanic Certificate (additional classes that may be needed for required prerequisites will be covered by the scholarship) and another program to obtain their Class A license. Applications will be accepted through May 17.

In addition to tuition and tools, the Edison scholarship will cover support services as needed, such as transportation and childcare, through an agreement with nonprofit Brotherhood Crusade. Program graduates also qualify for a job at SCE. Successful applicants who pass SCE’s new employee assessments will be eligible to start as groundmen.

“We are proud to announce our first lineworker scholarship,” said Caroline Choi, senior vice president of Corporate Affairs, Edison International and SCE. “With one of the most diverse populations in the country, we believe it is important that our workforce reflects the communities in which we live and serve. The initial focus of the program will be on attracting Black participants since the current number of our Black lineworkers is less than the Black population in our communities.”

Edison International is using $1 million shareholder funds for the four-year pilot to provide scholarships of up to $25,000 to expand diversity in its lineworker pipeline.

Cornelius Browning Jr., like Jones, started at SCE as a meter reader. He is a former groundman and apprentice and now works as a senior planner specialist after 16 years with the utility.

He learned about the company’s lineworker scholarship after reading a recent story and admits, “I got emotional and felt proud,” especially since the co-worker featured is a fellow Compton resident.

“This is a career you can start while you are young and establish your financial stability,” said Browning. “Edison is bringing jobs into the community that are available to people who didn’t know these types of jobs existed.”

Jones, a former reserve firefighter with the LA County and La Verne fire departments, has loved construction and building things from a young age. It’s a love he shares with his three kids as they build things like their raised fruit and vegetable garden.

It is also why he was attracted to the lineworker job.

“You see something built from the beginning and see it operating, like building a power line,” he said. “There is a real sense of pride in that.”