In addition to helping to protect the environment, this SCE employee helps protect crews during snake season.
Skip to content
Stories : People
Download Photos Download All 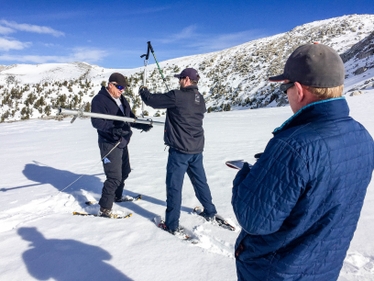 It was a crisp January day in the Sierra with the white snow setting off a dazzling blue sky above Mono Pass, but the Southern California Edison snow survey team didn’t have ...
View Story 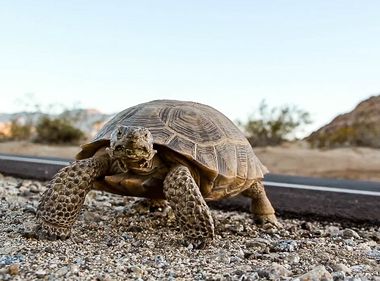 It was a crisp January day in the Sierra with the white snow setting off a dazzling blue sky above Mono Pass, but the Southern California Edison snow survey team didn’t have ...
View Story

World Turtle Day is May 23. The nonprofit American Tortoise Rescue created the day 17 years ago to raise awareness around the protection of turtles and tortoises and their ...
View Story
View Comments
Leave a Comment
Comments
Stories : People
Download Photos Download All

In addition to helping to protect the environment, this SCE employee helps protect crews during snake season.

March may be the start of spring, but it is also the start of snake season in California. And herpetologist Jack Goldfarb is about to get very busy.

As the only herpetologist among his biologist co-workers on Southern California Edison’s Environmental Services team, he will be conducting several “Rattlesnake Awareness Trainings” to help keep crews safe as they work in the field, often in rural areas.

“Rattlesnakes are out right now. Spring is when they come out,” said Goldfarb, who advises crews to not only watch where they put their hands and feet, but to get to the hospital immediately if they are bitten.

It’s all a part of the team’s effort to ensure the company protects all species and complies with environmental laws and regulations as they work on projects that can vary from a simple pole replacement to a 180-mile transmission project.

“We want to minimize our impact to the environment and be good stewards,” he said.

As a herpetologist, Goldfarb focuses on amphibians and reptiles, which include lizards, snakes, tortoises, frogs and salamanders. It’s a passion that started when he was 3 years old.

On an annual summer trip to Vermont, the family was staying at a local inn when his father called him outside. In the back was a large group of bullfrogs making their loud calling noises.

“I remember running out and having this feeling of euphoria,” said Goldfarb. “It was love at first sight — I was just fascinated by them. I knew then exactly what I wanted to do with my life and career.”

He studied STEM (science, technology, engineering or math) at Moravian College and eventually earned his master’s degree in biology and natural resource management from East Stroudsburg University. He also studied tropical herpetology in Costa Rica for six months as a graduate student.

Growing up in Pennsylvania, he always wanted to move West because of the diversity of reptiles in the area. Soon, he landed in California where he has worked for SCE as a staff herpetologist for the past 10 years.

“I am right in the thick of renewable energy as we upgrade the grid, all while helping to protect the environment,” he said. “We are minimizing our impact to the environment and SCE is doing it correctly.”

A large part of Goldfarb and his team’s work involves an in-depth environmental review process for all SCE projects that may disturb the ground and surrounding environment. The group looks for signs of endangered species and their habitat before crews begin any work project.

“We want to make sure the crews don’t impact them,” he said.

The team also looks out for the crews’ safety, especially around venomous snakes such as the Southern Pacific Rattlesnake. A few years ago in Porter Ranch, a lineman was working near a substation loading pallets into his truck when he was bitten three times by a rattlesnake. It was hot that day and the employee did not see the rattlesnake hidden behind one of the pallets.

“It was an accident,” said Goldfarb, who was called out to the site to review what happened. “It was a safety issue — watch where you put your hands and feet.”

The lineman was treated immediately at the hospital and made a full recovery. Bites are rare. More common are calls from crew members who want to make sure a snake they encountered is not venomous. Crews also call about snakes in equipment such as electrical panels.

“Snakes live mostly underground, so they like to be covered. Our equipment is another cover for them,” said Goldfarb, who will call a biological contractor to help remove the snakes when they get a call from the crews.

For Goldfarb, his passion for the environment and animals is something he is passing on to his 6-month-old daughter, whose middle name is Wren, a type of bird. He loves to be outdoors with her and the family often goes on long hikes. And at night, he reads her books about lizards.

“Herpetology is my life,” he said. “We are helping to keep the lights on while minimizing our impact to the environment.”

For more information about STEM careers at SCE: edisoncareers.com.