SCE’s pilots picked up the used helicopter in Virginia and flew it home across nine states.
By Justin Felles
Subscribe

Keeping the lights on just got a little safer for Southern California Edison’s Aircraft Operations team.

“For 20 years, we’ve had to rely on contractor helicopters for large maintenance projects,” said TC Corell, SCE chief pilot. “Our helicopter fleet was only equipped to lift small loads, and we needed to find a way to be better, safer and more efficient.”

SCE introduced helicopters to help with maintenance and construction projects in 1959. The aircraft are used to transport crews and equipment between transmission line towers and to complete air inspections of power lines extending across SCE’s service territory. They’re especially useful for replacing poles in hard to reach locations, a common encounter for field crews working on SCE’s pole-loading program, which will assess and replace up to 1.4 million poles over the next six years.

“We searched online and found a used, medium-duty helicopter in Virginia with low-flying hours,” said Jeff Gunn, SCE aircraft technician. “It’s a Bell 205A1 built in the 1970s, designed to work in the dirt and in excellent condition for its age.”

Over several months, the helicopter was rebuilt and modernized to meet SCE’s safety requirements. Once the refurbishment was complete, a flight crew flew to Virginia to inspect the helicopter and bring it home — across nine states.

“Our only option was to fly,” said Aurelio Murillo Jr., SCE aircraft technician. “If you put an aircraft on a truck, you never know what will happen from road vibrations, so flying was the safest option.”

The crew flew from Tennessee to Chino, California, encountering rain, fog and airports that were out of fuel. After three days, they arrived home.

Now, SCE’s pilots and technicians are training and learning the inner workings of the helicopter before it’s put into service to help keep the lights on this summer. 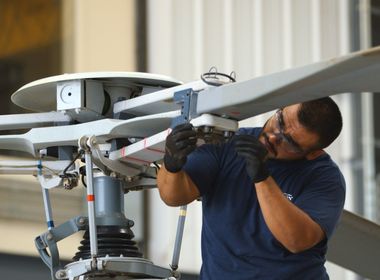 Like the precision of a surgeon, lives often depend on the dexterity and professional competency of Southern California Edison helicopter mechanics. The core of seven mechanics overseeing SCE’s fleet of helicopters based ...
View Story
View Comments
Leave a Comment