SCE uses reclaimed water and other measures to aid in the efforts.
By Ron Gales
Subscribe

Even before California Gov. Jerry Brown announced the first mandatory water restrictions in state history, Dan Arrighi, water resources manager at the San Gabriel Valley Water Company, was “searching every nook and cranny to find ways to save water.”

Though he and his counterparts at water agencies statewide have been battling drought conditions for years, the proposed restrictions are unprecedented and will greatly increase the need to conserve water.

“All the different water companies are comparing notes about what we need to do,” Arrighi said.

Southern California Edison’s Rosemead headquarters sits in the San Gabriel Valley Water Company’s service territory. Landscaping surrounding nearly all SCE buildings in Rosemead has been irrigated with reclaimed water since 2010. The move has helped save an average of 2.9 million gallons of drinking water each month.

Edison’s move was “very helpful for lowering per capita use of potable water” for his agency, said Arrighi.

SCE uses other methods to reduce water usage at its facilities across its 50,000-square-mile territory. Its Mountainview power plant in San Bernardino County uses only non-potable water for cooling operations, as permitted by the California Energy Commission.

“Nearly 50 percent of the cooling water the plant uses comes from an undrinkable underground aquifer,” said Hazem Gabr, Corporate Water Quality manager at SCE. “We treat the water on-site, and that helps clean up the aquifer.”

The remaining 50 percent used by Mountainview is reclaimed water from the city of Redlands, where the plant is located. The plant also captures storm water for use in the cooling towers. In addition, the Mountainview plant recovers and recycles 80 percent of the water discharged from the plant’s cooling processes.

“Regardless of drought or water cost, sustainable water resource management is the smart way to go,” said Gabr. “The drought in California has added another driver for managing our water wisely, but these ideas have existed at Edison for many years.”

The facility was completed in 2012 and attained the Leadership in Energy and Environmental Design (LEED) Gold certification from the U.S. Green Building Council, in part for its water-efficiency features. Since 2012, new SCE construction projects have been built with LEED certification as a goal.

SCE has also installed sustainable, drought-tolerant landscaping at more than 20 facilities across its service territory, with water use reduction averaging 60 percent at those locations.

Arrighi said he believes the upcoming restrictions will drive more water-efficiency measures, even among early adopter companies like SCE.

“We’re fortunate because the San Gabriel Valley has a large underground aquifer, with more than 8 million acre-feet (of water),” he said, “but we are using water faster than Mother Nature can replenish it. It’s a precarious situation.” 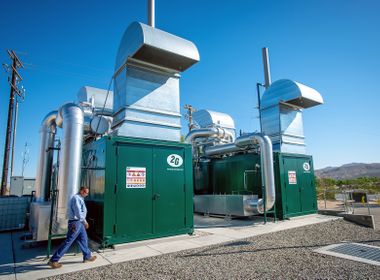 King Midas may have been able to turn ordinary objects into gold, but Logan Olds, general manager of the Victor Valley Wastewater Reclamation Authority, goes one better. He converts organic waste into energy, which means millions in energy savings and...
View Story
View Comments
Leave a Comment